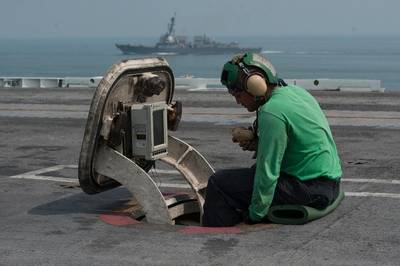 USS Harry S. Truman (CVN 75) returned July 25 to its homeport at Naval Station Norfolk for the first time in nearly a year, following the completion of sea trials.

"Sea trials is a five-day underway that pushes the limits of the ship; a true shakedown," said Truman's Executive Officer Capt. Cassidy Norman. "Everything we've done for the past year has been building up to this moment. I'm proud to finally have our ship back out on the waterfront."
Team Truman navigated through the sea trials checklist completing a number of evolutions, including small boat recoveries, testing Aqueous Film-Forming Foam sprinkler systems, high-speed turns, catapult testing and a simulated replenishment-at-sea alongside USNS Medgar Evers (T-AKE 13).
"This is the big leagues now," said ship's boatswain, Chief Warrant Officer 2 Erik Allison. "It's time for our Sailors to showcase and build on their knowledge of these shipboard evolutions. It's time to show that we can drop anchor and we can take care of this ship."
Since the shipyard period, Truman Sailors have also overcome rigorous testing on their ability to perform in various areas such as damage control, deck seamanship and flight deck operations, which are viable, simulated scenarios that can occur while at sea.
"This is our first time back out on the Atlantic since we pulled in to start the maintenance period a little under a year ago," said Logistics Specialist 1st Class Kurt C. Trammell II. "We completed more than 300 hours of shipboard evolutions during the five days at sea. Our ship and her crew were pushed to their limits while we were out there, but we came out on top."
Trammell wasn't the only person excited about the ship's recent performance. Commander, Naval Air Force Atlantic Rear Adm. Bruce Lindsey said he was not only impressed with the teamwork displayed by Truman's crew, but also the resiliency the ship showed throughout the rigorous at-sea evolutions.
"Truman's on-time completion of its maintenance availability and its successful performance during sea trials means that this capital warship is one step closer to doing what carriers do: conduct prompt and sustained combat operations from the sea," said Lindsey. "This isn't just a win for Truman. It's a win for our Navy and a win for our country. It means our carrier force, and our fleet as a whole, is more ready to deliver sea control and combat striking power anywhere, anytime our nation requires us to do so."
Truman is currently homeported at Naval Station Norfolk while conducting a work-up cycle in preparation for deployment in spring 2018.