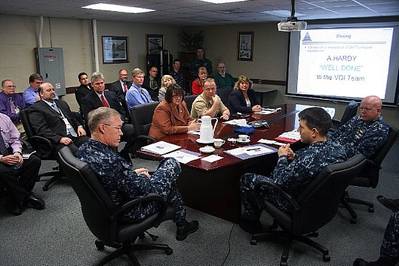 The virtual desktop initiative (VDI)  is a five year plan to deploy the VDI to more than 36,000 daily users and will replace 80 percent of the more than 23,000 desktop computers in more than 2,500 classrooms at 68 learning sites around the world.

"CNATTU Keesler is the first learning site to implement the virtual desktop initiative (VDI), which will expand throughout the NETC domain," said Rear Adm. Don Quinn, NETC commander,. "We have thousands of computers. To keep pace with current technology, security risks and software, each computer currently has to be updated. When you virtualize a classroom, you shift from multiple updates to an update of a single server. In this case, we went from 152 computers to three servers. Now when we update, we only have to do it three times instead of 152. It's a huge time and money saver."

Besides being a money saving venture, Quinn says he is also pleased by how VDI saves electrical power and time, and benefits the students.  "There's also a power issue - instead of running 152 desktops we now have only 152 monitors and three servers. So we save on electricity, manpower, and time," Quinn said.

"In terms of mission effectiveness, the most important thing is speed. It's so much better for the students. It's reliable, it's faster, and instructors now spend less time fighting technology and more time teaching. It is clear that once we incorporate this change in more than 2,500 electronic classrooms containing more than 23,000 computers, that this is a huge deal for NETC and the Navy."