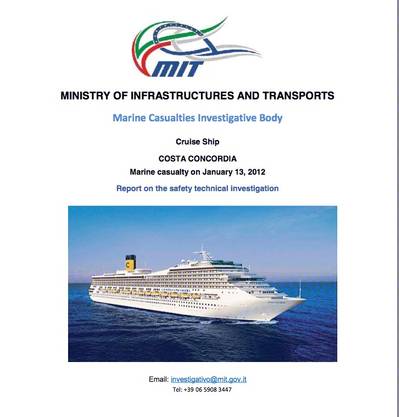 The Italian Ministry of Infrastructure & Transport (MIT) releases its investigation report on the January 13, 2012 stranding of the cruise liner.

The report is the result of a thoroughly comprehensive investigation of all aspects of the accident and is available for download here. It does not seek to attribute blame for an accident that was clearly the result of human error. Many recommendations are made by the investigators, and those that appear particularly relevant and concrete are extracted below.

The immediate flooding of five watertight compartments, where most of the vital equipment the ship was located, some distance from where she ended up, marks the Costa Concordia casualty unusual in the extreme.

Stabiliity
Concerning stability related issues, the investigation recommended that the following measures should be considered with the aim of improving the existing requirements:

1. Double-skin for protecting the WTCs containing equipment vital for the propulsion and electrical production;
2. Limiting of the downflooding points on the bulkhead deck to be discussed in the light of Part B-2 of Chapter II-1of SOLAS 74, as amended
3. Provision of a computerized stability support for the master in case of flooding; and
4. Interface between the flooding detection and monitoring system and the on board stability computer, taking into consideration regulations II-1/8-1 and 22-1 of Chapter II-1of SOLAS 74 as amended.

(Initiatives in 1. and 2., above, are meant to be addressed to new ships while the discussion on the content of 3. and 4. should be extended to both new and existing ships.)

Vital Equipment & Electric Distribution
The following issues need to be discussed for possible improvements of the existing requirements:

(The above mentioned recommendations number 1, 2 and 3 are meant to be addressed to new ships only.)