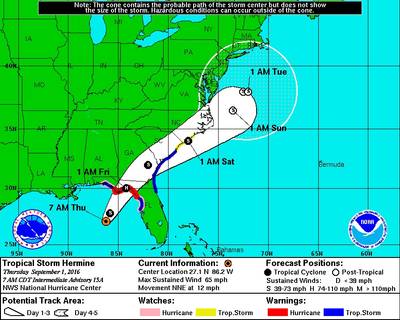 The Captain of the Port (COTP) North Carolina has set Port Condition X-Ray for all navigable waterways in the North Carolina COTP Zone in preparation for the anticipated weather impact of Tropical Storm Hermine, the U.S. Coast Guard announced.

Gale Force winds of 34 knots or greater are predicted along the coast of North Carolina.
Under Port Condition X-Ray, pleasure craft are advised to seek safe harbor, and commercial vessels that intend to enter, transit or remain within any North Carolina port must comply with several requirements outlined below:
Drawbridges will remain closed when wind speeds are 34 knots or greater or once evacuations begin.