Congestion at Port of Rotterdam Seen Persisting Through 2022 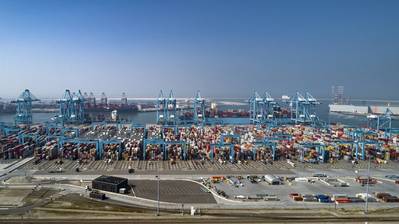 Congestion and bottlenecks in moving container traffic through the Port of Rotterdam, Europe's largest, are likely to persist through 2022, port officials said on Thursday, potentially weighing on economic recovery after the COVID-19 pandemic.

Although throughput volume at the port is now above 2019 levels, it is being constrained by various logistical challenges the port is seeking to address, the officials told a news briefing.

They said the highest immediate priority was improving schedule reliability, but that was difficult as the global fleet of ships has effectively been reduced by 25% by longer waiting times around key ports in Asia and the U.S.

Ships are not currently waiting outside Rotterdam, but storage capacities are full and connections with the European hinterland are not running smoothly.

"We don't see any major changes in the current situation until at least the end of 2022," said Emile Hoogsteden, the port's commercial vice president.

"As long as everybody keeps spending and ordering online, e-commerce, then we don't see any changes. So the congestion and bottlenecks will last so we have to deal with and we have to work through the challenges."

As an example, the port's director of containers Hans Nagtegaal said the average "dwell time" per container has increased to seven days from four before the pandemic.

"You can imagine what that will do to the capacity of a terminal, but also the efficiency," he said.

Last month Rotterdam reported a 7.8% increase in TEUs (standard shipping containers) for the year through September as economies and global trade continue to rebound from the COVID-19 pandemic.

Hoogsteden said the increase was slowing now, to 2.2% in October.

Using the port's best month of 2019 as a measuring stick, "we see that there is still quite some gap between the potential volume which we could have handled and what we currently are handling", he said.

The port is taking various short-term steps including data sharing to increase the speed of throughput, and long-term infrastructure investments in expansions and connections with the hinterland.