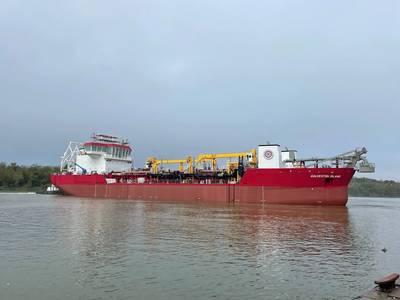 The new 6,500-cubic-yard-capacity trailing suction hopper dredge is in the water and is scheduled to be in operation the first half of 2023 as planned, Great Lakes said in an update on Monday.

The dredge will be equipped with a direct high-power pump-ashore installation, dredging system automation, dynamic positioning and tracking, U.S. EPA Tier 4 compliant engines, and have capabilities of running on biofuel to minimize the environmental impact. The Tier 4-compliant engines significantly reduce the vessel’s climate footprint, while other incorporated features minimize turbidity and marine species entrainment.

The newbuild will replace one of the older hopper dredges in the Great lakes fleet, Terrapin Island, which is scheduled to be taken out of service during the fourth quarter of 2022 after a 42-year working history.

This Terrapin Island was planned for retirement upon the Galveston Island delivery, but based on her age the company has decided to accelerate her retirement to significantly reduce its operating, labor and maintenance costs and improve productivity for the overall fleet, Great Lakes said. Work planned for the Terrapin Island will be delayed until another hopper dredge completes its regulatory drydock at the end of December.

The retirement of the Terrapin Island will result in a non-cash write-off of approximately $8 million in the fourth quarter of 2022.

Great Lakes hopper fleet renewal program will be complete in 2025 with the delivery of the sister ship to the Galveston Island, at which time Great Lakes will have the largest and most modern hopper fleet in the U.S., the Houston-based company said.

Lasse Petterson, President and Chief Executive Officer of Great Lakes, said, “After implementing our restructuring plan in 2017, we have invested in both productivity upgrades to our best performing vessels and executed on our new build program. This has provided us with additional capacity and improved efficiencies and will allow us to retire some of our older dredges and rationalize some of our older support equipment. These strategic moves will have a positive impact to our emissions footprint and our competitiveness in the coastal protection and maintenance markets as well as address the specific needs in the growing offshore wind market.”