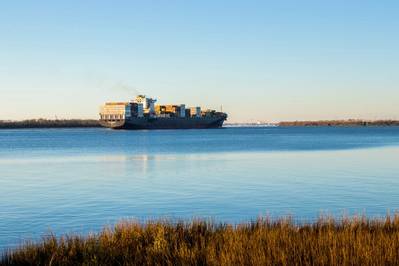 At a ceremony held earlier in March, officials celebrated the beginning of construction on the Charleston Harbor Deepening Project to 52 feet.

"It is a monumental accomplishment to begin construction on the Charleston Deepening Project, which make Charleston the deepest port on the East Coast at a time when deep and wide shipping channels are necessary," said Jim Newsome, South Carolina Ports Authority president and CEO.

"The container shipping industry today is dominated by big ships, and ports must adapt to handle them in order to remain competitive. Our project will be completed just ten years from its initial conception in 2010, enabling Charleston to serve the fastest growing region in the country with the ability to handle ships fully-loaded with heavy export goods," Newsome said.

The U.S. Army Corps of Engineers, Charleston District awarded the first two construction contracts last fall, which together provide for the deepening of the more than 20 miles long Charleston Harbor Entrance Channel to 54 feet. Including the dredging of the upper and lower harbors to 52 feet, the project is expected to achieve significant completion by 2020.

Newsome said, "It is an exciting and busy time for the Port, having just received two new neo-Panamax cranes and celebrated the beginning of construction on the Charleston Harbor Deepening Project. We look forward to the next milestone, the opening of Inland Port Dillon, next month."