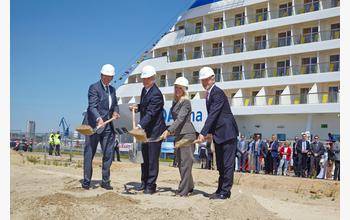 Construction of the third cruise terminal in Hamburg commenced July 4 with a symbolic groundbreaking ceremony. And in less than a month, the biggest cruise ceremony will take place on the river Elbe, the fourth edition of the Hamburg Cruise Days, taking place August 1-3. The month of August will see in total 43 cruise calls.

Surface construction work on the site of Hamburg’s third cruise terminal at the Kronprinzkai quay in Steinwerder officially commenced last Friday, July 4, with a symbolic groundbreaking ceremony. In recent years the city has become one of Europe’s most popular cruise ship destinations. In order to benefit from this potential for growth Hamburg plans to expand its status as a cruise location and has commissioned the Hamburg Port Authority (HPA) to build a third cruise terminal (Cruise Center 3, CC3 for short) in cooperation with Hamburg Airport.

In addition to construction of the terminal building the project also includes the provision of parking spaces and access roads; the strengthening of quay walls and operation of the third terminal as well as of the existing terminals in Altona and the Hafencity.

The new terminal at the Kronprinzkai quay, in the port’s Mittlerer Freihafen area, is being constructed on a site equivalent to two football pitches. Following completion it will be able to process 8,000 passengers at any one time. There will be separate embarkation and disembarkation areas to ensure the smooth handling of the corresponding amounts of baggage. Disembarkation will take place in the east building, while new guests are able to simultaneously board their vessel via the west building. The intersection to the new CC3 terminal will also be modified and equipped with traffic lights. In addition to land access it will also be possible to reach the new terminal by ferry. A public jetty is being built in the eastern area of the terminal complex for this purpose. The existing quay walls will be retrofitted with fenders, bollards, and pile moorings to enable even the largest cruise liners to dock in future. The costs of the overall project, including transport connections and future investment in the CC1 terminal, are some €80 million. The CC3 third cruise terminal is designed to be used for an initial period of 15 years.

How busy the port can be during a single month, demonstrates the upcoming August. For the first time May will not be the busiest month but rather August 2014. “With a total of 43 ship’s calls; the 2014 Hamburg Cruise Days and a corresponding passenger volume of approx. 125 000 August will be the absolute high point of the year,” said Gerd Drossel, managing director Hamburg Cruise Center. The 2014 Hamburg Cruise Days from 1 – 3 August will see a total of seven cruise ships in the city. The first ships – the “Delphin” and the “Europa” – will arrive on 1 August. On Saturday, 2 August the “Gann”, “AIDAstella”, “Deutschland”, “Europa”, and “MSC Magnifica” will be mooring in the city. The last ships to arrive will be the “Deutschland” and the “AIDAluna” on 3 August, all together turning the port into Europe’s cruise hot spot as well as presenting themselves at a spectacular parade. In addition to this, the “Blue Port” light installation will bathe the port in a magical light.

This year the organizers will once again be focusing on the concept of bringing the cruise world onto the landside. The four kilometer-long portside event area will extend from the HafenCity Hamburg district to Altona. Twelve thematic ‘islands’ with live music stages; premium gastronomy; sport and spa facilities; maritime shopping offerings and cruise line promotion areas will be devoted to any- and everything to do with cruises. The heart of the event will be the “Cruise Village” in the HafenCity.

This year the Hamburg Cruise Days will be offering a very special Austrian “delicacy” – for the first time the event’s maritime flair will also be noticeable in Vienna. Hanseatic city Hamburg will be running a spectacular event entitled “Ahoy Vienna! Hamburg is coming” in Austria’s capital, based around a supersize paper ship which will arrive on the Danube Canal in Vienna’s city centre on 1 August. Large membranes aboard the ship will be transported to three central locations, where they will be folded into paper ships of the size of a grown man in front of passers-by. The show stopper? Each of these “daughter ships” will present different aspects of Hamburg. In the evenings the mother ship on the Danube Canal will become the projection screen for scenes from the Hanseatic city with the Great Hamburg Cruise Days Parade broadcast live to the ship on August 2.

To date, 187 planned ship’s calls have been registered for the Hamburg 2014 season. The number of passengers will increase to just under 600,000 (+ 8 percent). In total, 23 cruise lines have registered a total of 35 cruise liners to call at Hamburg in 2014.