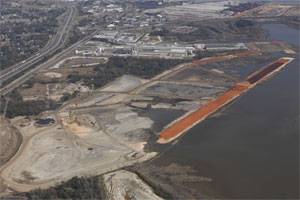 “Mobile Container Terminal, which was the first part of the project, is rapidly growing,” said Jimmy Lyons, Director and CEO of the Alabama State Port Authority. “We have three services at MCT now and expect to add more. The intermodal container transfer facility will add much-needed infrastructure to reduce the number of trucks on our highways eliminating both congestion and emissions. We are actively putting together financing plans for both the transfer facility and the logistics park.”

The facility, estimated to cost $75m and take three years to complete, connects an existing marine terminal with up to five National Class 1 Railroads. The ICTF will extend geographical reach of the container terminal and increase its national significance.

Lyons added that all permits are in place and much of the engineering, approximately 95 percent, is complete on the ICTF. Jobs will be created both short term during construction and long term once the facility opens.

Funding for ICTF will be provided by ASPA, the Federal Department of Transportation (DOT) and private sector sources. The construction is divided into packages that can be phased as funding is available. Preliminary site work for the ICTF is underway with an estimated completion of June 2009. The value of these contracts is $10.6m. Site fill work is scheduled to begin in July 2009.

The first element of the facility, the container terminal, became operational in its first phase on October 1, 2008. This facility was constructed utilizing funds from the Alabama State Port Authority, the State of Alabama, the Federal Department of Transportation and the private sector partners, Mobile Container Terminal, LLC. The container terminal is currently serving companies throughout Alabama, the Florida panhandle, western Georgia, eastern Mississippi and Tennessee.

ICTF is the second element of the facility. Construction of the logistics park, the third element, will start shortly after the contracts are in place for the ICTF. ASPA officials anticipate the Authority and private sector partners will bear the costs for the logistics park, generating an additional $30-40m in construction activity.