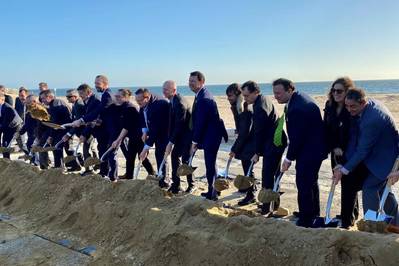 With 800 MW capacity, Vineyard Wind 1 will meet the electricity needs of more than 400,000 households and, according to Iberdrola will create 3,600 jobs.

Vineyard Wind 1 will be operated by Vineyard Wind, a company 50 % owned by the Iberdrola group -through AVANGRID subsidiary Avangrid Renewables- and Copenhagen Infrastructure Partners (CIP). The project is located 24 km from the coast of Martha's Vineyard.

A ceremony to mark the start of the construction of Vineyard Wind 1 was held in Barnstable county, Massachusetts. The event was attended by Deb Haaland, the United States secretary of the interior, the governor of the State of Massachusetts, Charlie Baker, and other state and local officials.

“Vineyard Wind 1 is on a par with the most ambitious offshore developments globally, including those developed by the Iberdrola Group. Not many countries have the ambition to launch their first project at a scale that will power 400,000 homes and create 3,600 jobs,” said Ignacio Galán, Chairman and CEO of Iberdrola and Chairman of AVANGRID.

"With 15 years of offshore wind leadership, Iberdrola and Avangrid are more than ready to help the US benefit from the substantial opportunities of offshore wind including economic investment and job creation. Our offshore developments in New England and North Carolina/Virginia could represent a total investment well above $15 billion in the coming years.”

Under the Project Labor Agreement (PLA) with the Southeast Massachusetts Building Trades, the work being done on site is using local union labor.  The PLA ensures that at least 500 of the jobs created during the construction phase of the project will be filled by local tradespeople and includes aggressive hiring targets for women and black, indigenous and people of colour (BIPOC), Iberdrola, which plans to invest more than $35 billion in the United States between 2020 and 2025, said.

"This is the kind of investment from Vineyard Wind that will allow Massachusetts to keep leading the nation towards a clean energy economy,” said Massachusetts senator Edward J. Markey, who took the opportunity to congratulate everyone involved in this unprecedented project.

December was a month of major “firsts” in the U.S. offshore wind space. The first federal auction for offshore wind was held for the West Coast…