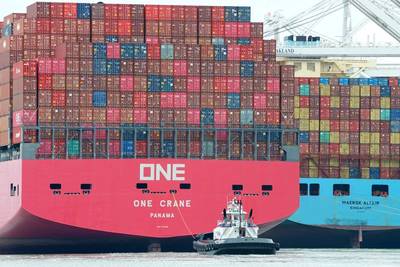 Surging shipments into the United States are fueling record high freight costs and logjams at seaports, but transportation executives say the rally will lose steam with a second wave of COVID-19 restrictions on the cards.

Container shipping companies, which move goods for customers including Amazon.com and Walmart, got stung late last year and early this year when COVID-19 halted trade around the world, and they question whether the U.S. import boom can be sustained.

"Let's not get carried away," Rolf Habben Jansen, chief executive of Germany's Hapag Lloyd, told reporters. "This is just a spike that no one has foreseen in an unusual period. There will be a correction to that."

U.S. consumer confidence ticked up in September, when retail sales accelerated. Still, consumers are eating through savings, layoffs are mounting and the country just set a record for new COVID-19 infections.

"Everything depends on the demand and how the second wave of COVID affects the world economy," Aristides Pittas, CEO of shipping company Euroseas, said at a Capital Link virtual event.

In recent weeks, the cost of transporting goods from Asia to the United States - one of the world's biggest retail markets – topped $4,500 per 40-foot container unit (FEU), the highest recorded level, data from S&P Global Platts Containers showed.

"We are sold out. The ships are 100% full. The containers are 100% full. You can't get a container," Jeremy Nixon, CEO of Japanese container group Ocean Network Express (ONE), said at a recent International Chamber of Shipping virtual event.

Total imports to the 10 largest U.S. seaports increased 9.2% in August and 12.4% in September, trade data from Descartes Systems showed.

U.S. business inventories rebounded in August, as retailers and other companies raced to restock depleted warehouses and distribution centers.

"Inventories are still quite low and there's a significant need to replenish them," said LeAnne Coulter, vice president of freight management at Penske Logistics.

Data suggests that record volume at the Port of Los Angeles, the busiest U.S. ocean trade hub, could stretch through November. Meanwhile, it is causing backups that could ripple through the supply chain.

"This will probably taper off in the first or second week of December," Port of Los Angeles Executive Director Gene Seroka said of the import rush.