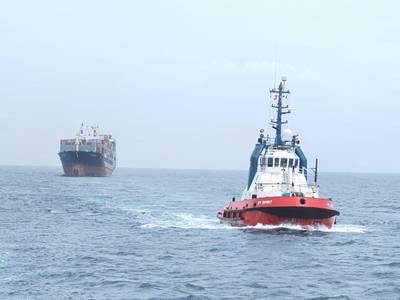 A containership lost steering off the coast of Mozambique on Monday after its crew put out an engine room fire on board the 680-foot vessel.

Towage operator KOTUG International said two of its vessels responded after picking up a mayday call from the Marshall-Islands-flagged Em Oinousses, approximately 50 miles off the coast of Nacala, Mozambique, while en route from Maputo, Mozambique to Mombasa, Kenya.

KOTUG said its Rotortugs RT Spirit and RT Magic carried out the salvage in high seas, making quick connections to the disabled vessel for tow into Nacala.

Em Oinousses' entire 25-person crew was able to disembark in Nacala without injury on Tuesday.

Ard-Jan Kooren, CEO of KOTUG International, said, “We are glad that we were able to bring the MV Em Oinousses and its crew to a safe haven and prevented a possible disaster for the vessel, its crew, and the environment. I am proud of our well-trained crew who adequately responded to the Mayday signal.”