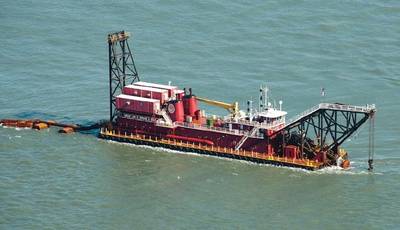 Conrad Shipyard said it has been awarded a contract to build four anchor barges, two deck barges and three crane varges for Great Lakes Dredge & Dock Company LLC (GLDD), headquartered in Oak Brook, Ill. The four anchor barges will be built in Louisiana at Conrad’s Morgan City Shipyard, and the deck and crane barges will be built at its shipyard in Orange, Texas.
Conrad Senior Vice President and Director Dan Conrad made the announcement: “We have delivered seven vessels to GLDD since 2003,” he said. “Our engineering, sales and management teams have worked closely with GLDD to design these vessels to their exact specifications and to meet their critical delivery schedule.”
Executive Vice President and Chief Operating Officer, Scott Theriot, commented on the complexity of the project: “This new construction contract is right in our wheelhouse,” he said. “We are extremely well positioned for serial production of specialty barges at multiple locations. We have the capacity, the high-tech ship manufacturing equipment, and a seasoned workforce and hands-on project management teams tightly focused on quality.”
Theriot said the four anchor barges and two deck barges are scheduled for delivery during the first and second quarters of 2018, and the three crane barges are scheduled for delivery in quarters two and three of 2018.