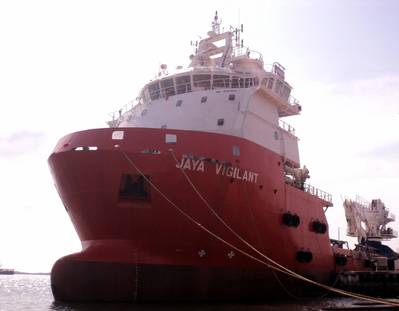 Jaya Holdings announced it has signed a contract to charter its newbuild DP2 Platform Supply Vessel (PSV) Jaya Vigilant for a long term operation in the Indian Ocean, offshore Mozambique. The two-year contract, which includes charterer’s options, has a value of more than $20 million.

Jaya Vigilant, designed as a large PSV, is now being upgraded with additional equipment required for the charter’s work scope prior to delivery from Jaya’s own yard in Batam, Indonesia at the end of September 2013. The work scope includes Remotely Operated Vehicle (ROV) support, survey work and core sampling in water depths of up to 2,000 meters and thus requires a 50 ton, subsea rated, deep water crane and a mezzanine deck for the ROV spread, as well as additional communications kit, survey pole equipment and enhanced passenger facilities on board.

Jaya Vigilant is the second of Jaya’s large PSVs. The first vessel in the series, Jaya Valour was upgraded and delivered at the end of July this year. She is operating on fracking and coil tubing projects in South East Asia under a term contract, as previously announced.

Similar to her sister ship, Jaya Vigilant is highly versatile and customisable with full under deck cargo capacity for rig supply work and 1,000 square meters of clear deck space for either cargo or the installation of light construction equipment. The vessel has more than 5,000 tons of cargo deadweight capacity and both brine and mud tanks, in addition to firefighting equipment to FiFi 1 standard. She features a gym and an internet café on board for passengers and crew, and complies with SPS 2008.

Jaya Vigilant and her sister are built with molded beams of 20m and 8,000 brake horsepower main engines, as well as two bow thrusters and two stern thrusters.

With the delivery of Jaya Vigilant in September, Jaya will have seven newbuilds remaining in its current shipyard orderbook. Two of these new build vessels slated for delivery from Jaya’s yard in Batam are purpose built ROV support vessels with large subsea cranes and diesel electric propulsion.