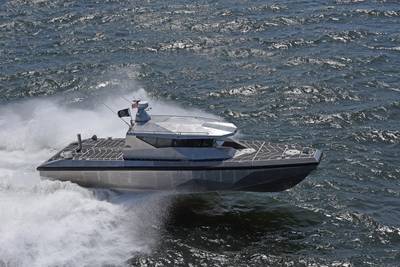 Metal Shark won the contract to produce the U.S. Navy’s next-generation patrol boat, the PB(X), the replacement for the fleet of force protection boats currently in use with Navy Expeditionary Combad Command’s Coastal Riverine Forces (CRF). Subject to annual appropriations, the Navy intends to replace approximately 100 to 160 of its existing 25-ft. and 34-ft. CRF patrol boats with the larger and more modern PB(X) platform over the next 15 years.

The Navy has placed an initial, immediate order for eleven of the new vessels. Under the terms of the award, potentially worth over $90 million, Metal Shark will build up to 50 PB(X) vessels for the Navy, along with trailers, spares and training packages, and technical support.
“PB(X) was one of the most challenging and most sought-after U.S. military boat procurement opportunities in recent history; the result of a years-long process pitting Metal Shark’s engineering and manufacturing capabilities against multiple leading U.S. naval architect firms and nearly all of our competitors,” said Metal Shark’s CEO Chris Allard. “The award of PB(X) to Metal Shark is the result of a tremendous team effort and I couldn’t be more proud of our people.”
The winning PB(X) design is a 40-ft., welded-aluminum pilothouse patrol boat designed by Metal Shark’s in-house engineering team. Leveraging its extensive experience with military patrol craft of similar size, Metal Shark designed a bespoke craft ideally suited to accommodate all mission parameters.
Immediately identifiable thanks to its chiseled, angular profile and a unique faceted hull, the PB(X) is powered by twin diesel inboards and water jets. Metal Shark designed a moderate aft deadrise, wide-waterplane, sharp-entry hull form that not only achieves 35+ knot sprint speeds while displaying superb dynamic stability in a range of conditions, but also offers enhanced handling and greatly reduced operating cost at the 10-15 knot escort and cruise speeds where the vessel will spend the bulk of its operational life. The PB(X) features ballistic protection and can be armed with a range of crew-served and remotely operated weapons systems.
In order to fully optimize the hull and propose a more mature design, Metal Shark built a PBX running prototype hull, designated PB(X)-P1, which was extensively tested in a wide range of operating conditions. This test platform became the basis for Metal Shark’s resistance, powering, and weight testing, and determined the final configuration proposed to the Navy.
“The testing of PB(X)-P1 validated our design choices, mitigated our areas of concern, and resulted in a design proven to perform exactly as expected under real-world loads and conditions,” explained Mr. Allard. “We made this up-front investment to eliminate any and all potential concerns and to deliver a thoroughly tested and proven, next-generation patrol boat platform to the U.S. Navy.”
The PB(X) will be built at Metal Shark’s Jeanerette, Louisiana production facility, which specializes in the rapid, serialized assembly of military patrol boats. Other significant military fleet builds currently underway at the facility include ongoing production of the Navy’s 32’ Force Protection Boat – Medium (FPB-M) and 26’ High Speed Maneuverable Surface Target (HSMST), and the U.S. Coast Guard’s 29’ Response Boat – Small (RBS).