Another Conversion for Keppel Shipyard 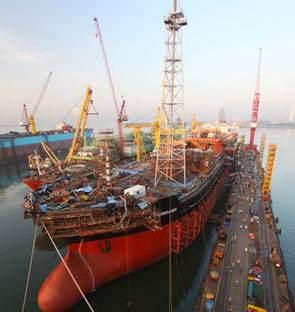 A ceremony for the naming of the Floating, Production, Storage and Offloading vessel (FPSO) prior to its deployment in the Oyo field, 70km off the coast of Nigeria was held at the shipyard. The vessel is expected to deliver first oil in fourth Quarter 2009.

The Secretary to The Government Federation of Nigeria, Mr. Mahmud Yayale Ahmed, and Nigeria’s Speaker of the House of Representatives, Mr. Dimeji Bankole were in attendance.

Mr Nelson Yeo, Executive Director of Keppel Shipyard said, “Keppel Shipyard is pleased to carry out the conversion of Bumi Armada’s second FPSO, Armada Perdana. This achievement of delivering her successfully and safely, with a record of 1.8 million man-hours without lost-time injury, has been through the efforts of everyone working on the project. This conversion further strengthens the partnership between our two companies.

The vessel, which arrived in May last year, underwent fabrication, installation and integration of a 12-point spread mooring system, riser balcony, topside facilities and upgrade of accommodation and auxiliary support systems.

It now has a storage capacity of 1 million barrels of oil with water and gas injection capabilities included in its topside. It is also capable of processing 45,000 barrels of oil per day (bopd).

Keppel Shipyard’s affiliation with Bumi Armada goes back into the last decade when it first converted the FPSO Armada Perkasa in 1997 for operation in the PM3 Field, Malaysia. It was recently upgraded further in 2007 for deployment in the Okoro Setu Field, Nigeria.