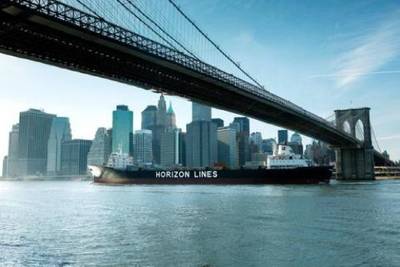 "We are viewing this as the first step in a repowering initiative for Horizon Lines vessels serving in the Hawaii and Puerto Rico trade lanes," said Sam Woodward, President and Chief Executive Officer.  "The two initial steam vessels targeted for the planned repowering are structurally viable for the conversion from steam-powered to dual diesel/LNG engines.  Additionally, our repowering project has the support of the American Bureau of Shipping (ABS).  We plan to work closely with the ABS and the U.S. Coast Guard (USCG) throughout the life of the project."

The project's goal is to reduce fuel consumption and lower emissions.  The project, which would include an integrated repowering solution encompassing main engines, supporting components, and LNG storage tanks, has attracted interest from both domestic and foreign shipyards.  As a result, six request-for-pricings (RFPs) have been issued to U.S. shipyards and six have been issued to foreign shipyards.  The company has not decided where the repowering work would be conducted at this time, pending receipt and evaluation of the RFPs.

Horizon Lines requested a predetermination ruling from the USCG National Vessel Documentation Center on coastwise eligibility in order to determine if the company could consider foreign options in addition to U.S. shipyards for the project.  The USCG ruled that the work as described can take place in a foreign shipyard without jeopardizing the Jones Act status of the vessels.

"We expect to receive the completed RFPs in mid-July and will evaluate each based on the overall value that the shipyard can provide in terms of quality of work, cost of the project and schedule requirements," said Pete Strohla, Vice President and General Manager of the company's Ocean Transportation Services group.  "As we further explore a comprehensive fleet program, additional RFPs will be needed to meet our vessel requirements.  We expect U.S. shipyards will provide bids for this initial repowering project, as well as for upcoming projects.  We tentatively expect work to commence on the first vessel in January 2015 and the first two ships to be completed late that same year or in early 2016."

Horizon Lines also is conducting due diligence regarding various engine manufacturers capable of meeting the company's specifications for a dual-fuel, medium-speed diesel power plant required for the planned repowering project.  The company currently does not have a contract with any engine manufacturer but has engaged MAN Diesel & Turbo SE to conduct preliminary engineering, consulting and design work related to the proposed repowering project.

"Horizon Lines is committed to a comprehensive repowering program that will improve our fleet's fuel efficiency and environmental impact," said Bill Hamlin, Executive Vice President and Chief Operating Officer. "Doing this in a cost-effective manner, while at the same time continuing to provide outstanding service to our customers without disruption, is consistent with Horizon Lines' commitment to its customers, the consumers in the markets we serve, and our obligations as a Jones Act carrier."