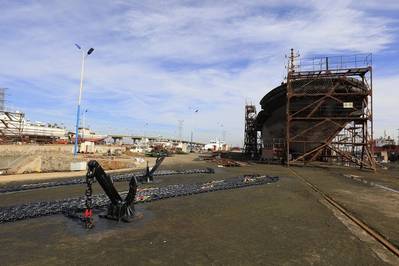 Global ship deliveries have been hit as yards in China struggle to get fully back to work as a result of the coronavirus outbreak, with one shipbuilder saying it could not deliver two vessels.

The coronavirus has caused chaos in Asia and beyond with flights suspended, businesses disrupted and entry restrictions imposed by governments trying to ward off its spread. The global shipping trade has also been hit.

"Workers are still not coming back to their positions due to the coronavirus. It is not known when they will resume work and when the two vessels will be completed," he added.

This confirmed a statement by 2020 Bulkers on Tuesday which said that two newcastlemax dry bulk vessels due to be delivered in April and May face possible construction delays.

China is one of the biggest shipbuilders and shipping sources say there have been delays to vessels already meant to have hit the water and other yards had declared force majeure.

"There is no real indication of when full production will resume," one industry source said.

Chinese authorities have asked companies to put workers into quarantine for 14 days after returning from their home towns for the Lunar New Year holiday, which was extended by a week.

The China Association of National Shipbuilding (CANS), which represents shipbuilders, said in a statement it was "generally hard for the vessel makers to resume work and deliver vessels on time".

Some of China’s shipbuilders were highly likely to be unable to deliver vessels before July 1, which increased the risk of not being able to fulfil their contracts, CANS said.

Shipping sources said the delays were also having an impact on the fitting of exhaust gas cleaning systems known as scrubbers, which are needed to enable ships to continue to use high sulphur fuel after tough new rules on emissions.

"Over 70% of vessels currently undergoing scrubber retrofitting are doing so in China. On that front, there are on-going delays at shipyards because workforces are depleted, taking vessels out of action," Charles Chasty, research analyst with broker Affinity Shipping, said.

"China accounts for over 40% of all new buildings. So, beyond the on-going current issues, such as the depletion of the labor force, vessels currently under construction are being delayed. Some of these vessels may even slip into 2021," Chasty told the Reuters Global Markets Forum.

CANS data showed that around 75% of workers had come back to work at key shipbuilding companies in the southeastern provinces of Fujian and Liaoning, but only around 62.5% workers had returned to Shanghai as of Monday.