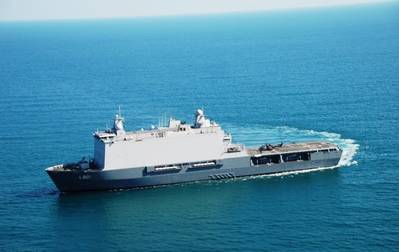 For the next 4 months, Johan de Witt will be the EU Naval Force flagship, hosting the Force Commander, Commodore Peter Lenselink, and his multinational staff on board.

HNLMS Johan de Witt is a Landing Platform Dock, 176.5 metres in length and 16,948 tonnes displacement. She can accommodate up to 600 persons and has many different assets, teams and capabilities on board, such as an enhanced medical facility, with a fully equipped operating room and a specialized medical team.

Two Cougar helicopters are embarked, a Landing Craft Task Element and a Scan Eagle UAV, an unmanned aircraft. The warship also has a team from Belgium on board who operate a specialized boarding craft known as a Fast Raiding Interception and Special Forces Craft (FRISC) and a Maltese Special Duties Enhanced Boarding Team (MSDEBT), who are trained to execute maritime awareness and security operations and are able to board ships when necessary.