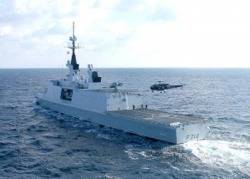 The Counter-Piracy force of the European Union (EU NAVFOR), typically comprising 4 – 7 surface combat vessels patrolling the Gulf of Aden and Horn of Africa, has been joined by the French navy frigate FS Guépratte .

The 125 meter long FS Guépratte with 3600 metric tonnes displacement is a second-line multi-mission stealth frigate of the French Marine Nationale, in service since 2001.

Equipped with a Panther helicopter, her contribution to scouting the seas  for piracy will be highly valued.

She is named after the 19th century admiral Émile Paul Amable Guépratte.