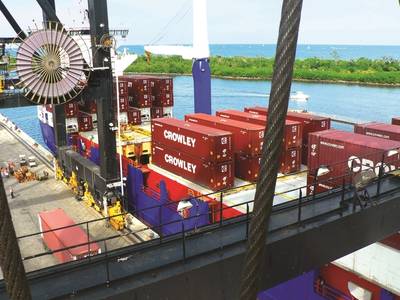 Port Everglades' largest tenant is urging the Florida Board of Pilot Commissioners to reject a proposed fee increase for harbor pilot services that it says would unfairly raise average pilotage costs more than 100 percent for shipping lines that call frequently at the port.

While the proposed fee structure would decrease fees for cruise ships, it would hike the costs for companies that operate frequent-call feeder vessels that sail in and out of Port Everglades, Crowley Maritime Corporation said in a statement. Overall, it said the pilotage fees would soar between 88 to 139 percent depending on the size of the vessel, leading to an average increase of 108 percent for Crowley.

“The Board of Pilot Commissioners’ proposal slashes charges for massive cruise ships, then unfairly overcharges cargo ship operators, the backbone of the port, to make up the difference,” said Steve Collar, senior vice president and general manager of Crowley’s international services.

The state Board of Pilot Commissioners is scheduled to consider the proposed increase at a public rate hearing October 24-26 in Fort Lauderdale, Fla.

Crowley’s vice president and chief counsel, Alan Twaits, said, “The current rates for pilotage services at the port are fair and fairly apportion financial responsibility for pilotage fees among the various operators at the port based on their risk profile and financial capacity. There is no reason to disturb the status quo and ocean carriers should not be hit with such an exorbitant increase that is unjustified, arbitrary and capricious.”

Crowley, which operates containerships and petroleum tank vessels serving the U.S., Caribbean and Latin America trade from Port Everglades, in 2016 entered a 10-year lease and operating deal with Broward County for a 99-acre marine terminal at the port. Under this agreement, Crowley guarantees significant volumes of container moves each year. Crowley expects to make 414 vessel calls at its terminal in Port Everglades in 2018, an increase from 384 in 2017.