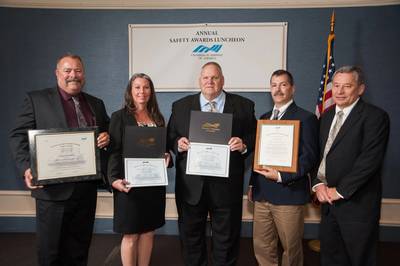 Seventy-five Crowley Maritime Corporation vessels have received the Chamber of Shipping of America (CSA)’s annual Jones F. Devlin Awards in recognition of their outstanding safety records in 2013, honors given during a luncheon held last week in New Orleans, La. Each year the CSA grants Devlin Award certificates to manned merchant vessels that have operated for two or more years without incurring a Lost Time Injury (LTI), specifically highlighting the skills and dedication of the crewmembers responsible for safe vessel operations.

Crowley’s 2013 Devlin Award-worthy vessels together have achieved a total of 510 years of service without an LTI. Of the 75 awarded, 19 have gone without incident for 10 or more consecutive years, including the following notable vessels: Valdez Star, 23 years, and Gus E, MV Chief, MV Guide, MV Kuparuk River and Roger G, each with 15 years. Crowley’s vessels have earned Devlin Awards annually since 2005. This year, approximately 1,583 vessels owned by 52 companies were recognized. In total, the honored vessels accumulated 9,658 years of safe operations.

In addition to the 75 Devlin Awards given, two of Crowley’s vessels were also honored with Safety Achievement Awards for outstanding feats of safety in 2013. The first went to Stephen Foster, captain, Sunshine State, and his crew, who received a letter of commendation for assisting three groups of Cuban refugees in the Florida straits. The second and third awards were citations of merit given to the crew of the ATB Achievement/650-8 for the rescue of a man who was struggling to stay afloat in the entrance of Tampa Bay, Fla., and for the rescue of mariners aboard a sinking fishing vessel in stormy waters offshore from Clearwater, Fla.

“Safety is at the top of Crowley’s core values and strategic goals. The vessels receiving Devlin Awards exemplify this Crowley core value, because they live it every day – for themselves, their families and Crowley,” Golonka said.

The 2013 Safety Achievement Awards Luncheon marks the 56th year that the CSA has granted the Jones F. Devlin Awards. The CSA represents 34 U.S.-based companies that own, operate or charter oceangoing tankers, container ships and other merchant vessels engaged in both the domestic and international trades and other entities that maintain a commercial interest in the operation of such oceangoing vessels.

The following list shows all the vessels owned or managed by the Crowley family of companies that have been recognized by CSA with the 2013 Jones F. Devlin Award, along with the consecutive number of years each has operated without an LTI: