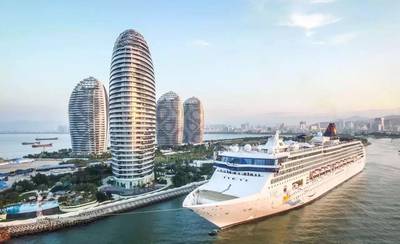 Three State-owned enterprises from the shipping, tourism and construction sectors will cooperate to equip up to eight cruise liners and offer diversified sightseeing services to tap the travel market in the South China Sea, says China Daily.

Sanya International Cruise Development Co Ltd, a joint venture by COSCO Shipping, China National Travel Service (HK) Group Corp and China Communications Construction Co Ltd, will buy between five and eight ships.
Sanya International already operates one cruise ship in the region, dubbed "Dream of the South China Sea."
In addition to buying between five and eight ships, the plan calls for the construction of new docks in the resort city of Sanya.
Liu Junli, chairman of Sanya International, said the ships may also "cruise around the South China Sea at the appropriate time," according to China Daily. The ships will travel to the Crescent group of islands, part of the Paracel.
The cruises will be managed by Dalian-based COSCO Shipping Ferry Co Ltd. Dream of the South China Sea will travel from Sanya to the Yongle Island, part of the Xisha Islands in Hainan province within this month.
It is not clear if foreigners will be allowed on these cruises or if they will be allowed to visit China's holdings in the South China Sea.
China claims 90 percent of the potentially energy-rich South China Sea. Brunei, Malaysia, the Philippines, Vietnam and Taiwan lay claim to parts of the sea, through which passes about $5 trillion of trade a year