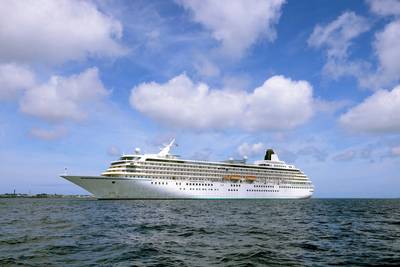 A luxury cruise ship has skipped its call to Miami and diverted to the Bahamas after a U.S. judge ordered its seizure as part of a lawsuit over unpaid fuel bills.

The Crystal Symphony, operated by Genting Hong Kong's Crystal Cruises, was scheduled to conclude a Caribbean voyage in Miami on Saturday, but the ship sailed to the Bahamian island of Bimini instead after a federal judge in Miami granted an order to arrest the 781-foot, Bahamas-flagged vessel over unpaid fuel bills.

The news is the latest in a series of negative events for the cruise industry, which has been hardly hit by the coronavirus pandemic, lockdowns and travel restrictions.

Last week, Crystal Cruises issued an advisory alert stating it would suspend operations for its ocean and expedition ships through the end of April and for its river cruises through the end of May while management could evaluate the state of business and its path forward.

"This was an extremely difficult decision but a prudent one given the current business environment and recent developments with our parent company, Genting Hong Kong," said Jack Anderson, Crystal's president.

Crystal’s three ships currently in operation—Crystal Serenity and Crystal Symphony sailing in the Caribbean and Crystal Endeavor in Antarctica—will complete their current voyages by early February.

An unknown number of passengers, believed to be in the hundreds, was on board Crystal Symphony when it rerouted to the Bahamas. A spokesperson for Crystal Cruises told NPR that passengers were given accommodations on the ship for Saturday night, and about 300 guests later traveled via ferry to Port Everglades in Fort Lauderdale, Fla.

Dozens of crew members have reportedly disembarked due to expiring contracts, and hundreds more are said to be still onboard, though uncertain about their future or employment status.