CTV Ordered for Vineyard Wind Project in the US 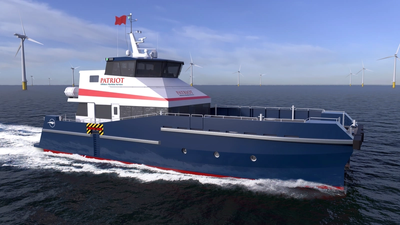 The 27-meter aluminum CTV will be built at Gladding-Hearn Shipbuilding in Somerset, Mass. for mid-2023 delivery. Based on an Incat Crowther catamaran design, it will be capable of carrying up to 24 technicians and personnel.

The vessel will initially hail from New Bedford and other Massachusetts ports during construction of the Vineyard Wind 1 project, transporting personnel and equipment in support of the 800-megawatt project 15 miles off the coast of Martha’s Vineyard. Afterward, it will be based in Vineyard Haven during the project’s operation and management phase. Vineyard Wind 1 is expected to begin delivering energy to Massachusetts in 2023.

“We are excited to have a Massachusetts company like Patriot on the Vineyard team and proud to support local jobs in Massachusetts through the employment of local maritime labor,” said Klaus Skoust Moeller, CEO of Vineyard Wind, a joint venture between Avangrid Renewables, a subsidiary of AVANGRID, Inc. and Copenhagen Infrastructure Partners (CIP). “These vessels will not only serve a critical role in both construction and operation and maintenance for our project but will also help to launch a new industry that will create jobs and reduce carbon pollution.”

“The development of offshore wind in the U.S. is creating jobs and new business opportunities for maritime companies like Patriot, and we’re proud to work with local labor to build the nation-leading Vineyard Wind project,” said Bill White, President & CEO of Avangrid Renewables, Offshore. “Drawing from skilled and experienced maritime services in Massachusetts is a win-win for our project and local workers, and represents another important step in this growing American industry.”

“We are honored that Vineyard selected Patriot to provide this CTV for its first U.S. commercial offshore wind project,” said Michael Landry, president of Patriot. “We are looking forward to a long and fruitful relationship.”

Several CTVs have been ordered in recent months as the relatively young U.S. offshore wind industry continues to gather momentum. In the years ahead, it's expected that dozens of these vessels will be built as part of a new Jones Act compliant fleet required to support the construction and long-term service of new offshore wind farms.

Vineyard, which noted it has an option to charter additional CTVs from Patriot, has also signed a contract with American Offshore Services for a second CTV that will be built by Blount Boats in Rhode Island. Both U.S.-flagged CTVs will be fully Jones Act compliant and will be manned and operated by locally sourced maritime union labor during the construction phase of the project, the developer said.

After the U.S. Bureau of Ocean Energy Management (BOEM) announced TotalEnergies and Duke Energy Corp as the winners of two…