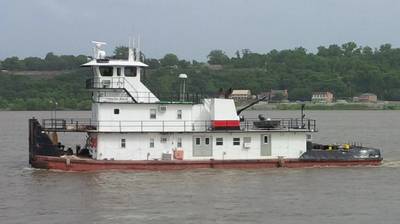 Carla Jenkins of Vidalia, Louisiana, proudly carries on a family tradition of business on the waterways. Owner and operator of Vidalia Dock and Storage, a company started by her father in 1956, Jenkins relies on engine distributor Laborde Products to keep her fleet running reliably.

Jenkins first became a Laborde customer last year, when she repowered her main work vessel, Vidalia Dock, with twin 1,260 hp Mitsubishi diesels. Vidalia Dock is a 93', 321 GT workhorse, hauling barges full of coal and crushed limestone on the Ouachita, Atchafalaya and Red Rivers up to 300 miles from home base. Engine operation has been flawless, according to Jenkins. "Every captain who's operated the boat has remarked on her performance and power," she said. "They've told me they're happy to come back and pilot Vidalia Dock anytime, and that's pretty special."

The fact that the Mitsubishi engines are strictly mechanical is a big plus, as far as Jenkins is concerned. "Faulty electronic components can cause real problems," she said. In the past, she had an electronic engine completely shut down when a sensor malfunctioned, leaving Vidalia Dock stranded until the piece could be fixed. The Mitsubishi units ensure dependable performance that helps prevent such work stoppages, "and they don't require expensive diagnostics and repair," said Jenkins.

Compared to the engines in her two smaller fleet boats, which are used for local harbor work, Jenkins finds Vidalia Dock's new Mitsubishi engines stunningly efficient. "My fleet boats have only twin 640 hp engines, and run 32 gph per engine, per hour. The 1,260 hp Mitsubishis are running 45-50 gph per engine, per hour. They're not burning a whole lot more fuel, but they provide nearly twice the horsepower." This is all the more impressive, noted Jenkins, since Vidalia Dock pushes six loaded barges. "The crew can't believe how little fuel she uses."

Not only is Jenkins delighted with the engines, she's been equally pleased with Laborde's customer service. "On a couple of occasions, we had something minor needing adjustment. Laborde came out right away. It's obvious they really know their engines," she said.

Vidalia Dock and Storage Company is scheduled to soon take delivery of yet another Laborde product. Jenkins is excited to upgrade one of the fleet boats, named Sonny J after her father, with a 40 kW genset. "As I need to replace generators and engines, I expect to choose more products from Laborde," she said.