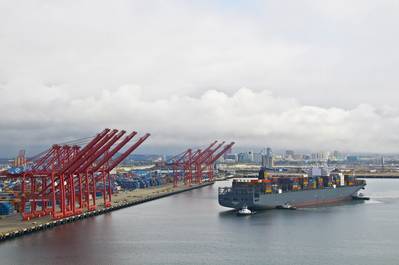 The U.S. trade deficit widened more than expected in January as a strong dollar and weak global demand helped to push exports to a more than five-and-a-half-year low, suggesting trade will continue to weigh on economic growth in the first quarter.

The Commerce Department said on Friday the trade gap increased 2.2 percent to $45.7 billion. December's trade deficit was revised up to $44.7 billion from the previously reported $43.4 billion. Exports have declined for four straight months.
Economists polled by Reuters had forecast the trade deficit widening to $44.0 billion in January. When adjusted for inflation, the deficit increased to $61.97 billion from $60.09 billion in December.
Trade subtracted a quarter of a percentage point from gross domestic product in the fourth quarter, helping to hold down growth to a tepid 1.0 percent annual rate.
In January, exports of goods fell 3.3 percent to $116.9 billion, the lowest level since November 2010. Overall exports of goods and services dropped 2.1 percent to their lowest level since June 2011.
There were declines in food exports, which were the weakest since September 2010. Industrial supplies and materials exports fell to their lowest level since March 2010. Petroleum exports also fell, touching their lowest level since September 2010.
Exports of non-petroleum products were the weakest since February 2011. Exports to the United States' main trading partners fell broadly in January.
Imports of goods fell 1.6 percent to $180.6 billion, the lowest level since February 2011. Import growth is being constrained by ongoing efforts by businesses to reduce a stockpile of unsold merchandise.
Lower oil prices as well as increased domestic energy production are also helping to curb the import bill. There were declines in imports of industrial supplies and materials.
Automobile imports were, however, the highest on record.
The politically sensitive U.S.-China trade deficit rose 3.7 percent to $28.9 billion in January.
(Reporting by Lucia Mutikani; Editing by Paul Simao)