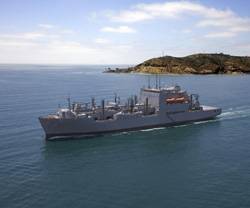 "As our 10th ship in the T-AKE class, USNS Charles Drew is another milestone for MSC," said Capt. Jerome Hamel, commander, Sealift Logistics Command Pacific, MSC's office in San Diego. "The T-AKE program is a continued example of MSC's commitment to support the Navy."

Drew is expected to begin conducting missions for MSC next spring and will operate in the Pacific. Drew is crewed by 124 civil service mariners and 10 U.S. Navy sailors who provide supply coordination.

Drew was christened and launched February 27, 2010, at the General Dynamics NASSCO shipyard in San Diego and underwent a series of tests and trials prior to delivery.

Drew is named for Dr. Charles Drew, an American physician regarded as the father of the blood bank who researched and developed methods of blood collection, plasma processing and storage.  Drew's research in blood storage first benefitted soldiers in the field during World War II, but has continued to save the lives millions of people worldwide. His blood bank design is still the model for modern hospitals and organizations such as the American Red Cross.