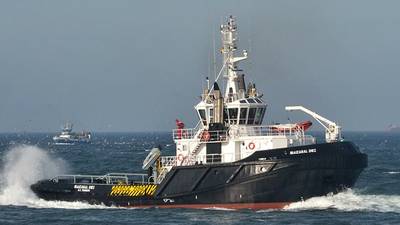 The design features a full raised forecastle running nearly half the length of the tug to provide a high standard of accommodation and the best possible sea-keeping capability for operation in exposed conditions.

Main Propulsion for the AVT36/70E comprises a pair of MaK 8M25 diesel engines, each rated 2,640 kW at 750 rpm, and each driving a Voith model 32R5-265-2 cycloidal propeller in tractor configuration.  This combination is predicted to deliver a Bollard Pull of 70 tonnes, and provide a free running speed of not less than 13.5 knots.  The indirect escort steering force is estimated at 110 tonnes at 10 knots. The operating range at economical cruising speed is estimated at 3,500 nautical miles.

The electrical plant is comprised of three identical diesel gen-sets, each with a 380 volt/50 Hz power output of 125kW.

The vessel is outfitted to the highest standards for a crew of up to 14 people.

Particulars of the AVT 36/70E Class, Voith propelled tugs are as follows: