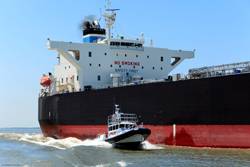 A christening ceremony was held last week at the Southern Yacht Club of New Orleans before the vessel was delivered to its homeport in Pilottown, LA.  The Crescent River Port Pilots operate on the Mississippi River between Pilottown and New Orleans.  Kvichak is currently building a second 50’ pilot boat for the CRPPA with delivery scheduled for September 2012.

Designed by Kvichak Marine, the all-aluminum vessel is powered by twin Detroit Diesel 60 series engines rated for 600 BHP coupled to Twin Disc MG5114SC marine gears.    Hamilton 364 waterjets are the chosen propulsors.  This combination allows for excellent maneuverability and a top speed of
~ 32 knots.  The vessel has a Wing Hybrid fendering system and a roof boarding platform specifically designed for the CRPPA.