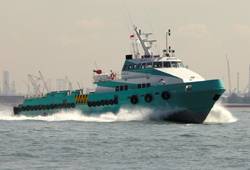 Penguin Shipyard International (“PSI”), a wholly owned subsidiary of Singapore‐based Penguin International Limited (“PIL”), has delivered its first Flex‐38 Green Crewboat, “Pelican Grace”, following a successful sea trial that saw the triple screw 38‐metre crewboat achieve cruising speeds of over 24 knots with a fuel consumption rate of only 510 litres per hour, which is substantially less than the fuel consumption of other mid‐sized, mechanically powered crewboats.

The Flex‐38 is a joint development by PSI, PIL’s offshore operating unit; Pelican Offshore Services (“POS”), which is also the vessel’s owner‐operator; and Moteurs Baudouin (“Baudouin”), an established marine engine maker based in Cassis, France.

The new Flex‐38 hull form is a stretched, re‐engineered and optimised version of the Flex‐36, the industry‐leading multi‐role crewboat that has been a part of PSI’s internally funded evergreen production series since 2006.

The Flex‐38 is the offshore industry’s first mechanically driven mid‐sized crewboat to be designed with fuel efficiency as the primary design driver. In addition to an optimised hull form and a re‐designed aerodynamic deck house, the Flex‐38 is also lighter and sleeker than its 36‐metre predecessor, and features ‐ for the first time on a crewboat – Baudouin 12M26.2 mechanical main engines.

Compared to Cummins’ 1,350‐BHP KTA38‐M2, which has been a mainstay of the Flex‐36 series, Baudouin’s 1,100‐BHP 12M26.2 engine is smaller, lighter and consumes about 20% less fuel, according to the engine makers’ spec sheets. This works out to be roughly US$40‐50 per engine per hour, based on current MGO prices.

The Baudouin engine also offers operational savings to ship owners by way of a longer “Mean Time Between Major Overhaul” (MTBO) period and a three‐year warranty on major components.

Commenting on the historic debut, PIL’s Managing Director James Tham said, “The Flex‐38 is not just two metres longer than the Flex‐36. The hull form has been completely reengineered and optimised, along with its configuration and equipment. From the base specs of the Flex‐38, owners can choose from a handful of variants that address different operational priorities, such as cargo capacity and passenger convenience.”

“This customer‐centric product offering, supported by our shipyards in Singapore and Batam that can collectively complete more than 20 Flex‐38s a year, will broaden our product reach and potentially increase our sales volume in the global crewboat industry,” said Tham, adding that the Flex‐38 will succeed the Flex‐36 in Penguin’s internally funded evergreen production series.

PSI is offering Flex‐38 buyers the choice of a standard model with an 80 sqm cargo deck and up to 90 passenger seats, or the Flex‐38L model, which features a 100 sqm deck and a smaller deckhouse. The yard will also configure seating and cabin types/arrangements based on specific owner requirements.

Jason Lin, President of Moteurs Baudouin, who was the distinguished guest at the naming ceremony of the “Pelican Grace” at PSI, said, “Moteurs Baudouin is a premium marine engine manufacturer in southern France with over 100 years’ history. The M26 engine is a true marine engine designed with many features specifically for professional marine applications, unlike many other competitors’ engines, which have been converted from industrial engines by birth.”

“Baudouin is known for reliability, easy maintenance and low operational cost throughout the years,” said Lin. “Thanks to the ingenious engineering work of PSI, the Flex‐38 matches the strength of Baudouin’s M26 engine seamlessly. It is a perfect combination.”

In coming months, PSI will roll out a “Not Green But Mean” crewboat based on the same Flex‐38 hull form powered by Cummins’ KTA38‐M2 engines. This crewboat – dubbed the Flex‐38S ‐ is configured for speed instead of fuel efficiency. “We appreciate that there are some charterers out there who are more interested in absolute performance rather than absolute fuel savings,” explained Tham.

A common feature of the Flex‐38 and Flex‐38S is they are both powered by simple‐butdurable mechanical engines ‐ which allow for on‐board maintenance by the crew ‐ instead of electronic engines, which typically require shore‐based support for repair and maintenance.