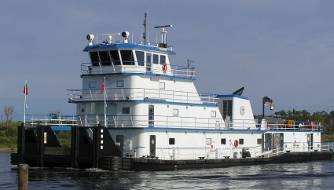 Horizon Shipbuilding, Inc., Bayou La Batre, Ala., has launched the third of five 140-ft towboats for Florida Marine Transporters (FMT). The M/V Rusty Zeller was launched on February 28, 2010 at Horizon Shipbuilding’s Bayou La Batre facility using their 600 metric ton TraveLift. This TravelLift is the largest on the Gulf Coast and allows for efficient launch of new vessels. It also facilitates lift and relaunch in a matter of hours instead of days, which results in quick turnaround for the repair of existing vessels up to 200 ft in length and 50 ft beam.

Shortly after the launch of the Rusty Zeller, FMT took delivery of the M/V Dennis J. Pasentine on March 12, 2010.  The towboats were designed by John Gilbert and are 140 ft long by 42 ft wide, with a 9.5 ft draft. The towboats are four-decked and outfitted for service in areas restricted to overhead clearances and draft limitations. The vessels are fitted with two EMD 710 12 cylinder engines generating a total of 6000 horsepower driving Sound propellers through Nico MGN 5023Z gearboxes. Two Cummins generators support ship’s power. The steering system is provided by EMI. M/V’s Dennis J. Pasentine and Rusty Zeller comfortably accommodate a pilot, master, engineer, and six crewmembers.

John Carnley, Horizon Project Manager, said, “The 6,000 hp vessel will push as many as 27 fully loaded barges while significantly reducing fuel cost normally associated with a tow of that size.”

Horizon Shipbuilding is also building a series of six 120-ft towboats for FMT, the first of the class scheduled for a Spring 2010 launch. The M/V Rusty Zeller is scheduled for delivery in June of 2010.