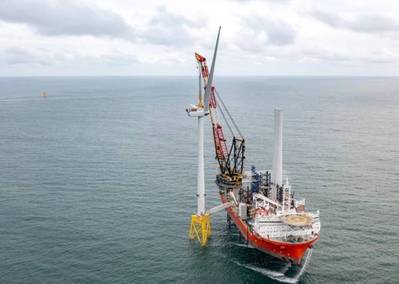 Offshore wind turbine makers have been working to build increasingly bigger turbines, and the likes of GE, Siemens Gamesa, Vestas, and MingYang have in the past two years or so unveiled designs for giant 14-16MW rated units.

It has been said that larger turbines, while more expensive per unit, reduce the overall cost of large-scale offshore wind farm development due to their being more modern and efficient, as well as leading to fewer units being required for offshore wind projects, thus reducing the number of foundations, cables, and trips for offshore installation vessels.

However, with the increasing number of countries looking to build offshore wind farms to meet their net-zero targets, a potential problem might be around the corner, as overall, there doesn't seem to be enough vessels to meet the growing demand for the installation of these giant offshore wind turbines.

According to Rystad Energy, the demand will outpace the supply of capable vessels very soon, by 2024.

"Operators will have to invest in new vessels or upgrade existing ones to install the super-sized turbines that are expected to become the norm by the end of the decade, or the pace of offshore wind installations could slow down," Rystad Energy said.

"Wind turbines globally, excluding China, have experienced a growth spurt in recent years, rising from an average of 3 megawatts (MW) in 2010 to 6.5 MW today, with the largest in operation clocking in at 10 MW. Turbines larger than 8 MW accounted for just 3% of global installations between 2010 and 2021, but that percentage is forecast to surge to 53% by 2030," Rystad said.

“When turbines were smaller, installation could be handled by the first-generation fleet of offshore wind vessels or converted jackups from the oil and gas industry. However, as operators continue to favor larger turbines, a new generation of purpose-built vessels is required to meet demand,” says Martin Lysne, Rystad Energy rigs and vessels analyst.

Unable to install new and larger turbines, the first-generation installation fleet has now transitioned into maintenance and repair services for installed turbines, while operators have upgraded other vessels’ cranes in order to remain competitive in the installations market, Rystad added. 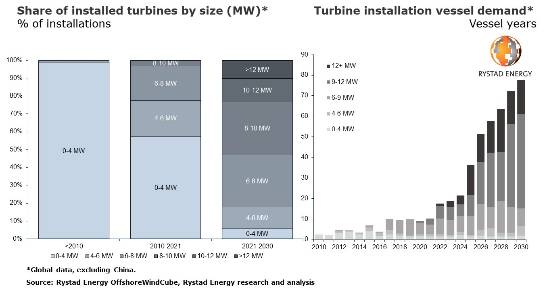 In Europe, Asia (excluding China), and the emerging US market, turbine sizes are ramping up towards 2025 and beyond.

Europe’s first commercial 10 MW turbine was installed in December 2021 at Scotland’s 1.1GW Seagreen offshore wind farm by Cadeler’s Wind Osprey, where a total of 114 turbines are set to be installed.

In the U.S, at the Vineyard Wind development in the US, 13 MW turbines will be installed by DEME’s Sea Installer after its crane upgrade.

Danish offshore wind installation firm Cadeler is contracted to install 14 MW turbines at the Sofia wind farm in the UK, and 14 MW turbines will also be installed at the Hai Long development in Taiwan.

Also, Vestas' 15 MW turbines will be installed at the EnBW He Dreiht project in Germany, while many US developments, such as Coastal Virginia (Siemens Gamesa) and Empire Wind (Vestas), are also looking to install 15 MW turbines.

Further, Rystad said, despite installing one 10 MW turbine at the Xinghua Bay wind farm last year, China is expected to lag behind Europe in average turbine size up to 2030. Although China will install some larger turbines in the coming years, most installations are expected to measure between 6 MW and 8 MW.

Worth noting, back in August 2021, China's said it would launch one of the world's largest offshore wind turbines with the nameplate capacity of 16MW.  The new MySE 16.0-242 is the world’s largest Hybrid Drive wind turbine, MingYang said at the time. MingYang's MySE 16.0-242 turbine will have a 242-meter diameter rotor, 118-meter long blades, and a  46000m2 swept area. The Chinese manufacturer said the turbine was scheduled for full prototype rollout in 2022, to be followed by prototype installation in the first half of 2023 and commercial production in the first half of 2024. 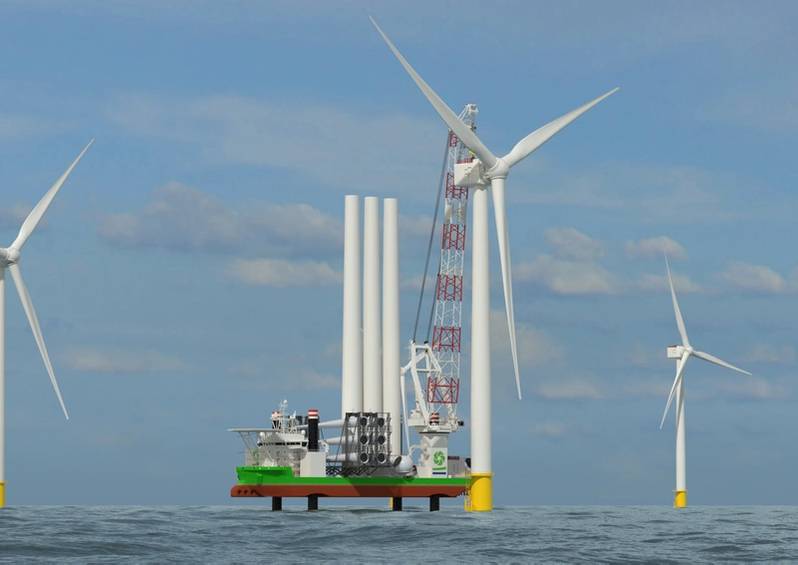 At the Vineyard Wind development in the US, 13 MW turbines will be installed by DEME’s Sea Installer after its crane upgrade, to be carried out by Huisman ©Huisman.

"As a result, many vessels have moved from Europe to China, where lower crane capacity vessels are still in high demand. Jan De Nul’s Taillevent was sold to China last year, and DEME’s Apollo has also recently been renamed and reflagged to work in the Chinese market. Excluding China, demand for 12 MW+ capable installations vessels is set to increase rapidly, taking a larger share of overall demand," the Norwegian energy industry Intelligence firm said.

"Out of the current fleet of purpose-built vessels, only a handful of units can install 10 MW+ turbines, and none are currently able to install 14 MW+ turbines. This will change towards 2025 as newbuilds start to be delivered and existing vessels get crane upgrades," Rystad said.

Rystad also provided a summary of vessels being future-proofed by having larger cranes installed: "Fred Olsen Windcarrier, DEME, and Cadeler are all planning crane upgrades, with Bold Tern, Brave Tern, Sea Installer, Wind Osprey, and Wind Orca all upgrading to 1,600-tonne cranes between 2022 and 2024, with options for other vessels to be upgraded."

Apart from upgrading the existing fleet, several companies, such as Van Oord, Cadeler, Eneti, Havfram, Seaway 7, and Dominion Energy have recently ordered newbuild wind turbine installation vessels, with some of them planned to be capable of installing turbines of 20MW capacity. 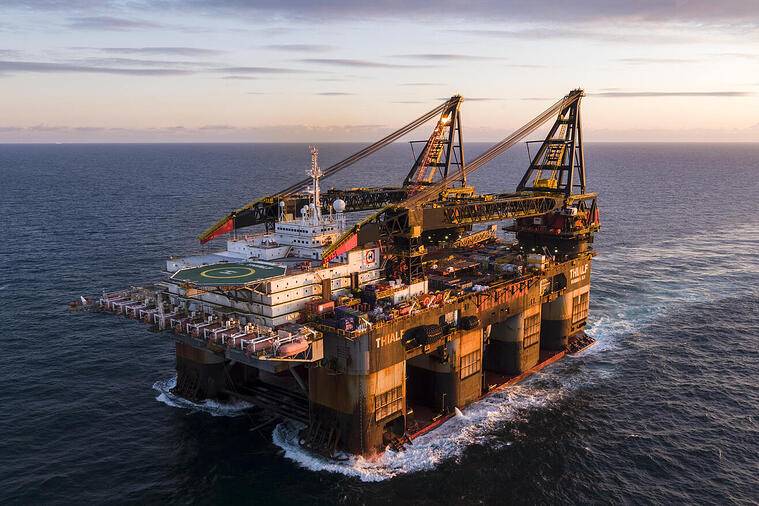 "Generally considered too large and inefficient for installing the smaller turbines of the past, these vessels have instead landed work in the offshore wind industry installing substations and heavy foundations. However, as the size of turbines increases, these units will fit right into the large cranes of heavy lift vessels such as Thialf and Sleipnir," Rystad said.

The Thialf will install 27 turbines – each measuring 9.5 MW – at the Arcadis Ost wind farm in the Baltic Sea in 2023, becoming the first floating vessel to install commercial wind turbines of this size.

According to Rystad, Heerema has said both the Thialf and Sleipnir are already capable of installing 15 MW+ turbines and, with some adjustments, these vessels could even install 20 MW turbines.

"Vessels built early this decade are already becoming outdated as turbines grow, making owners reluctant to commit to expensive newbuilds that could be obsolete before they are profitable. The cost to manufacture an installation vessel capable of installing 14 MW+ turbines ranges from $300 million to $500 million, but owners are opting for even bigger cranes in the hope of staying competitive for longer," Rystad said.

"A 1,500-tonne crane capacity with 150 meters lifting height is generally considered the requirement to install 14 MW+ turbines. Considering current pending orders, excluding vessels assumed to be operating solely in China, all 11 vessels are installing cranes of more than 2,000 tonnes, with some even opting for 3,000 tonnes. Owners have one eye on the future, with some already stating they will be ready for 20 MW turbines by the end of the decade," Rystad said.