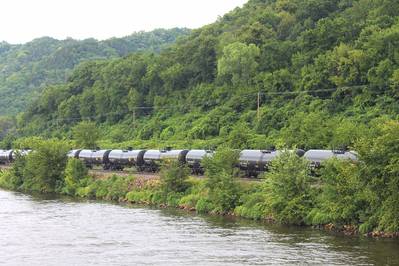 Canadian National Railway Co said about 20,000 gallons of oil was released following a freight train derailment at Plainfield, the U.S. state of Illinois on Friday, according to a filing with state pollution regulators.

The cause of the derailment was unknown, a filing with the Illinois Emergency Management Agency said on Saturday.
Local media reports estimated the spill to be 45,000 gallons.
The incident occurred when 20 cars of a Canadian National Railway Co freight train, carrying crude for Exxon Mobil Corp to Louisiana, went off the tracks, the Chicago Tribune said in a report on Saturday, quoting officials.
"No one was injured in the derailment. Officials confirmed that oil leaked from two of the cars on the Canadian National freight train, and a possible third car was leaking oil," the report added. (Source: http://trib.in/2uAFObw)
According to a report on the news website of Northwest Herald, most of the derailed cars were cleared by Saturday and the rest were expected to be removed from the site by Sunday.
Cleanup operations of the spilled crude was expected to take a few days, the report said.
Reporting by Vijaykumar Vedala