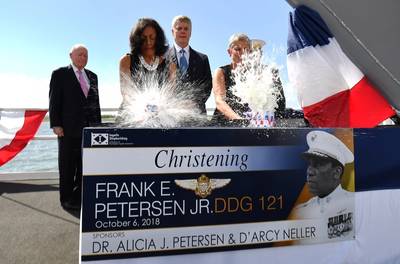 Approximately 900 guests attended the ceremony, including Alfred Gray, a retired general and former commandant of the U.S. Marine Corps, who was the keynote speaker. “We’re here to honor a great American, a great ship and a great shipyard as well,” Gray said. “Frank is the person who really gave all of the people that you’ve met here today their inspiration to go forward, to be tough about everything, to be disciplined and to never forget that above all, you’re a Marine warrior. It is that kind of spirit and that kind of belief that we honor today by naming this great ship Frank E. Petersen Jr.”

“We are here to christen this ship to the life and service of a true pioneer in the Navy and Marine Corps, Frank Petersen,” said Marine Corps Commandant Gen. Robert Neller. “The USS Petersen is now a reality, and it is a ship that will be in service to our nation for decades to come. DDGs play a vital role, not only in the Navy and defense of the United States, but for our allies around the world. To the shipbuilders, we really appreciate your efforts, skill, professionalism and hard work in building this ship. Thank you so much for that.”

DDG 121 is co-sponsored by Alicia Petersen, widow of the ship’s namesake, and D’Arcy Neller, wife of Gen. Neller. Together, Petersen and Neller officially christened the ship by breaking two bottles of sparkling wine across its bow.

Petersen spoke on behalf of both sponsors at the ceremony: “Our family has been in Pascagoula for about two days now, and the love and friendship that we have felt from everyone has been so contagious,” she said. “We believe that you are our family now and feel so happy that Frank’s ship is here in your home being built under the wonderful leadership of Ingalls. Ingalls not only does great work, but they take great pride in its ownership.”

Over the course of 30 years, Ingalls has built and delivered 30 Arleigh Burke-class destroyers. The shipyard currently has five DDGs under construction, including Jack H. Lucas (DDG 125), the first Flight III ship, which started fabrication in May. Ingalls was recently awarded a $5.1 billion multi-year procurement contract to build six more destroyers.

“All Ingalls ships are built for men and women like General Petersen with one goal in mind: to protect the brave Americans who defend our freedom, and Frank E. Petersen Jr., the ship, will be no exception,” said Ingalls Shipbuilding President, Brian Cuccias. “Today, alongside our Navy partners and the leadership of the great State of Mississippi, we are investing hundreds of millions of dollars in modernizing our facilities. Combine that with a hot production line and our talented and experienced shipbuilders, and we are uniquely positioned to provide our country with the highest quality, most capable destroyers in the world. Simply stated, Ingalls builds the finest warships the world has ever known—right here in Pascagoula, Mississippi.”

Arleigh Burke-class destroyers are capable, multi-mission ships and can conduct a variety of operations, from peacetime presence and crisis management to sea control and power projection, the builder said. The guided missile destroyers are capable of simultaneously fighting air, surface and subsurface battles. The ship contains myriad offensive and defensive weapons designed to support maritime defense needs well into the 21st century.