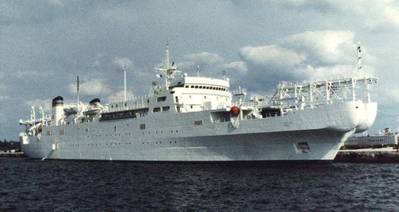 Work to be performed under the 90-calendar day shipyard availability includes services for the regular overhaul and dry-docking availability of the 513.5-foot vessel. The contract also contains 11 unexercised options, which if exercised, would increase cumulative contract value to $9,975,203.

Work at the North Charleston, S.C. shipyard is expected to be completed by April 2, 2022.

This contract was competitively procured via the beta.sam.gov website, with four proposal received, the Department of Defense said. The ship's operator, the Military Sealift Command (MSC), is the contracting activity.

Constructed at NASSCO in San Diego, USNS Zeus (T-ARC-7) entered service in 1984 as the first cable ship specifically built for the U.S. Navy. Though planned to be the first of two vessel series, the second ship was not built, leaving Zeus as the only ship of its class. T-ARC-7 is capable of laying 1,000 miles of cable at depths of up to 9,000 feet.