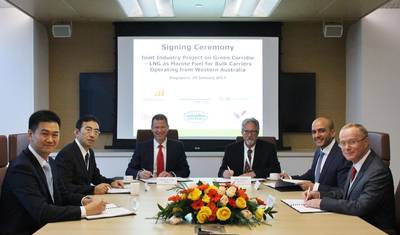 New regulations on limiting sulphur and nitrogen oxides emissions and a burgeoning global infrastructure are adding to the growing momentum for the more widespread adoption of LNG as a marine fuel.

“Green Corridor”, a new joint industry project (JIP) signed recently in Singapore, looks to capitalize on this opportunity to drive the development of the market. Under the JIP, partners BHP Billiton, Mitsui O.S.K. Lines, Rio Tinto, SDARI, Woodside and DNV GL will assess the commercial potential of LNG fueled vessels in a “green corridor” between Australian and China, culminating in the creation of a next generation Capesize design that will undergo Approval in Principle (AiP) under new DNV GL rules.

“As we approach the entry into force date for sulphur emissions, we are seeing interest in LNG as a ship fuel start to climb again,” said Morten Lovstad, DNV GL – Maritime Business Director Bulk Carriers. “As one of the largest LNG exporters in the world and with bunkering infrastructure coming online, Australia is well placed to support the bulk trade on the west coast with LNG as fuel. By working together with some of the industry’s technology leaders we are confident this new project has the potential to deliver a competitive, compliant and safe vessel and the business case to back it up.”

Woodside COO Mike Utsler said Woodside was excited to be a part of this joint industry project to be led by DNV GL: “We recognize that LNG as a transport fuel option presents opportunities, both in a commercial sense and as a low-emissions alternative to other marine fuels. This JIP importantly is bringing together mining companies, a shipowner and supplier, a ship designer and LNG producer and led by DNV GL to explore how we can develop the LNG fueled 'Green Corridor'. Woodside is this year taking delivery of the first LNG fueled marine support vessel in the Southern Hemisphere and we look forward to the findings from this joint industry project on the potential for LNG fuel use by bulk carriers.”

The JIP has two main objectives: building and assessing the business case of LNG as fuel for Capesize bulkers operating in the trade between Australia-China, and developing an efficient LNG fueled Capesize concept design. These activities will be run together, with the immediate results generated from one project fed into the other.

The financial and technical feasibility study examines a LNG fueled Capesize bulker operating from Australia. It will look at a wide range of factors including the capital costs, operational costs and price sensitivities in terms of LNG and low sulphur marine fuel oils, in comparison to both a conventionally fueled vessel and a LNG retrofit, as well as undertaking a high level bunker supply chain assessment to identify the key issues affecting the vessel design and business case.

The project partners will also work to develop a concept design for an efficient LNG fueled Capesize vessel. The ship will be optimized for operations from and to Australia, and will be developed to a technical stage so that it may achieve an Approval in Principle (AiP) in compliance with the new DNV GL rules. An Approval in Principle is an independent assessment of a concept within an agreed framework, confirming that the design is feasible and no significant obstacles exist to prevent the concept from being realized.