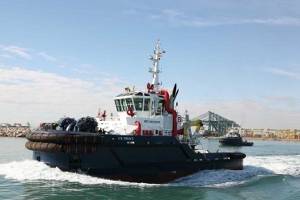 MAN Diesel Spain has been active within the tug segment recently, having played a key role in three orders that contract the company to supply 18 MAN Diesel L27/38 engines to Boluda Corporación Marítima, Spain, the international marine group and shipbuilder. The engines are destined for nine newbuilding tugs; ten engines were already delivered in 2009 with the remainder due in 2010/2011.

The VB Bravo will assist and escort ships, and conduct oil-spill recovery, pollution-control and fire-fighting operations in Spanish waters while the VB Titán and VB Trón will form part of the Boluda Towage and Salvage fleet. These tugs are designed for unrestricted navigation and provide towing services as well as executing fire fighting, ship-assistance and escort, cleaning-up of oil spills and pollution-control activities.

Shetland
Two tugs, featuring four MAN 9L27/38 engines (3,285 kW at 800 rpm), are bound for two twin vessels – the Solan and Bonxie, which will be based at the Shetland Islands (UK) Sullom Voe oil terminal in the northern North Sea. The Solan was launched on 17 December 2009 and the Bonxie on 18 February 2010. The tugs will be operated by the Shetland Islands Council and their design makes them well-equipped for towage, and the general assistance and escorting of tankers and other ships.

MAN Diesel has just finalized another contract with Boluda Shipyards - Unión Naval Valencia for the delivery of two 8L27/38 engines to a tug boat ordered by the Port Authority of Haifa, Israel.

The type L27/38 engine:
MAN Diesel’s L27/38 medium-speed engine in its eight- and nine-cylinder variants has been chosen as main engine for all nine tug boats on account of its high-torque performance characteristics, robust and compact design, characterized by a single, front-end box that collectively houses LT/HT cooling-water pumps, thermostatic valves, and lube oil pump, cooler and automatic filter.

Furthermore, the L27/38 requires only a low overhauling height that facilitates the on-site exchange of cylinder units (including cylinder heads, liners, pistons, connecting rods and fuel-injection valves). This characteristic enables a spare cylinder unit to be swapped in aboard, dispensing with the need to break voyages to return to the workshop.