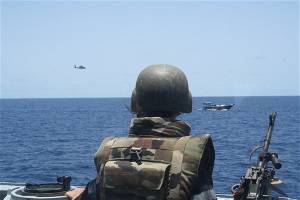 During the afternoon of the 13 May, the EU NAVFOR French warship FS Nivôse disrupted a Dhow that was suspected of being used as a Pirate Action Group (PAG) mothership since it was pirated over a year ago.

The Dhow, which is suspected of having carried out several recent attacks in the Arabian Sea and which still has her original crew on board as hostages, was spotted by an EU NAVFOR German Maritime Patrol Reconnaissance Aircraft (MPRA) earlier the same day. Once identified, the Dhow was tracked by the MPRA which guided the FS Nivôse into position.

In the morning of 13 May, the French warship and her helicopter approached the suspected pirate dhow and ordered her to stop. During the approach, several weapons and two attack skiffs were seen on board the Dhow. As she was considered to pose a very real threat to merchant shipping in the area and after several verbal warnings, the FS Nivôse was forced to fire warning shots at the Dhow in an attempt to get her to comply. The warning shots were also ignored but the Dhow changed course back toward Somalia.

Concerns for the safety of the hostages, who are under constant threat of death or violence from the suspected pirates, prevented the FS Nivôse from taking any further action against the suspect vessel but, unwilling to let her go with her attack skiffs on board, the French warship entered into a lengthy conversation with the suspected pirates who were ordered to abandon the skiffs. Snipers from the Estonian Vessel Protection Detachment (VPD) on board the FS Nivôse proved vital to reinforce this order.

The skiffs were eventually abandoned by the suspected pirates and the Dhow sailed off in the direction of Somalia. Without attack skiffs, it is nearly impossible for a Pirate Attack Group to launch further attacks.