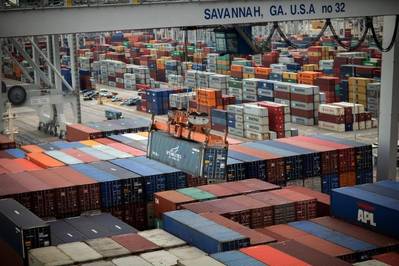 Executive Director Griff Lynch reported at the Authority board meeting Monday that several factors led to GPA's December record growth. "Strategic proximity to major population and manufacturing sites, direct interstate access and the most ocean carrier routes in the U.S. Southeast are the competitive advantages drawing customers to our ports," Lynch said. "As the largest single-terminal operation in the nation, Savannah's advantages are unmatched in the industry."

In its effort to stay ahead of demand and accommodate future needs, the GPA broke ground last month on its new inland terminal in Northwest Georgia - the Appalachian Regional Port. Port officials estimate the CSX rail route will reduce Atlanta truck traffic by 50,000 moves annually, and expand GPA's target market in Alabama, Tennessee and Kentucky. Each container moved by rail from the inland terminal will offset 355 truck miles on Georgia highways.

"GPA's track record of operational excellence over the past decade more than prepares it to achieve great things at the Appalachian Regional Port," said Board Chairman Jimmy Allgood. "This is the next step in our transition, moving additional cargo to rail, allowing more capacity on our interstates, and extending GPA's competitive benefits farther into the American heartland."

Inland terminal construction is expected to take just under two years, with the start of operations at the ARP targeted for the third quarter of calendar year 2018.

Allgood said the new inland terminal will make goods manufactured within its service region -- such as flooring, automobiles and tires -- more competitive in the global market, while reducing carbon emissions. The ARP's savings potential has already resulted in companies locating and expanding in Northwest Georgia to take advantage of the inland terminal's future benefits.

Allgood began the first GPA Board Meeting of 2017 with a moment of silence for Tom J. Mahoney, Jr. who passed away January 20. Mahoney had served as assistant attorney general for the GPA from 1987 until the time of his death. "For nearly three decades, Tom Mahoney helped steer GPA's growth and success with his wise counsel, knowledge of maritime issues and love of our ports. He will be missed."