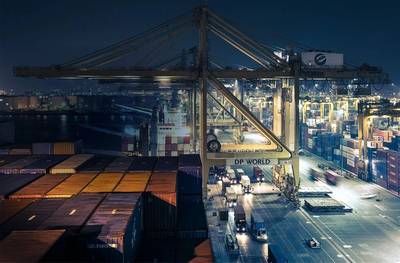 Dubai-based port and terminal operator DP World said that its gross volumes rose 4.8 percent to USD 35.6 billion s for the six months to 30 June 2018,  despite uncertainties in the container market.  On a reported basis, revenue grew 14.4%.

Revenue growth is supported by the volume growth across all three regions and the impact of new acquisitions including Drydocks World LLC (Drydocks), Dubai Maritime City (DMC) and Cosmos Agencia Marítima (CAM).

Profit attributable to owners of the Company before separately disclosed items has dropped 2.1%on a reported basis but grew 5.2% on a like-for-like basis.

DP World Group Chairman and CEO, Sultan Ahmed Bin Sulayem, commented: “DP World is pleased to report like-for-like earnings growth of 5.2% in the first half of 2018 and attributable earnings of $593 million. Adjusted EBITDA grew 7.9% to $1,322 million with margins at 50.3% on a reported basis and 54.4% on a like-for-like basis. This robust performance has been delivered in an uncertain trade environment, once again highlighting our operational excellence and the resilience of our portfolio."

Capital expenditure of $439 million invested across the portfolio during the first half of the year. Capital expenditure guidance for 2018 remains unchanged at up to $1.4 billion with investments planned into UAE, Posorja (Ecuador), Berbera (Somaliland), Sokhna (Egypt) and London Gateway (UK).

The acquisition of Drydocks, which closed in the beginning of 2018, is performing in line with expectations and we have seen increased contribution to our revenue line. At 1H2018, noncontainerized revenue accounted for approximately 37% of total revenue, up from 31% in 1H2017.

“The near-term trade outlook remains uncertain with recent changes in trade policies and geopolitical headwinds in some regions continuing to pose uncertainty to the container market. However, the robust financial performance of the first six months also leaves us well placed for 2018 and we expect to see increased contributions from our recent investments in the second half of the year,” Ahmed added.

Climate Fund Managers (CFM), the manager of the Climate Investor One facility (CI1), have announced that construction has…