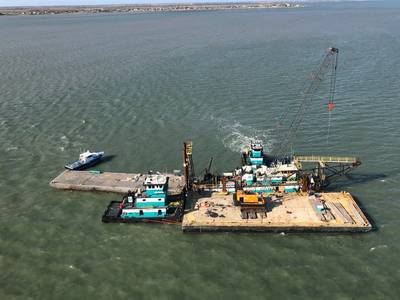 A dredge barge that was taking on water has been intentionally grounded in the Matagorda Ship Channel near Port Lavaca, Texas, the U.S. Coast Guard said.

The Coast Guard said its watchstanders at Sector/Air Station Corpus Christi were notified on Monday evening that the dredge barge Everett Fisher began taking on water. The towing vessel Dana Robyn pushed the bareg aground and recovered the four crewmembers aboard.

Coast Guard air and boat crews are on scene. T&T Marine Salvage is said to be involved in the repose.

Due to the location of the grounded dredge barge a safety zone has been established from mile marker 51 to mile marker 66 on the Matagorda Ship Channel, the Coast Guard said.

The cause of the vessel taking on water is under investigation.