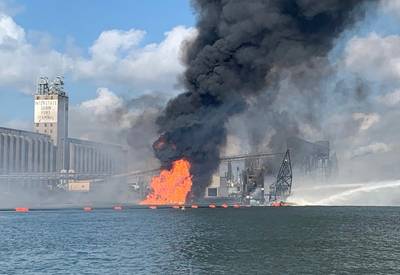 A lawsuit has been filed in Nueces County, Texas on behalf of a worker who was injured and burned in an explosion and fire that occurred while he was working on the dredge Waymon L. Boyd in the Corpus Christi Ship Channel last month.

The dredge worker, Jose Cantu, is among six crew members who were hospitalized after the dredge struck a gas pipeline, causing the vessel to catch fire and sink. Another four personnel on the vessel died.

“This type of maritime disaster should never have happened,” said Attorney Kurt Arnold of the Houston law firm Arnold & Itkin, who represents Cantu and his family. “There’s no excuse for it.”

“We are determined to discover the full truth of why this happened and ensure that the companies accept full responsibility for the severity of the consequences,” Arnold said. “The defendants need to do the right thing to take care of these workers and their families. We’re committed to making sure a disaster like this never happens again.”