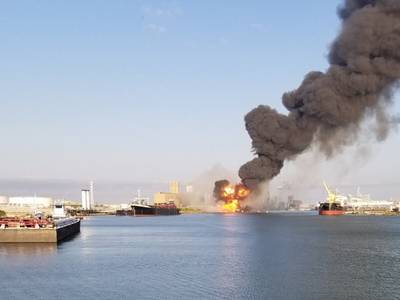 Four people are missing and six have been hospitalized for injuries caused by a pipeline explosion in the Corpus Christi Ship Channel on Friday, officials said.

The explosion and subsequent fire were reported at about 8 a.m. local time near Nueces Bay in the northern part of the city after a dredge struck a pipeline in the water. The dredge, Waymon L Boyd owned by Houston-based Orion Marine Group, was working on a private project, not the channel deepening work currently underway at the port.

The U.S. Coast Guard said it has rescued two crewmembers and continues to search for four missing from the dredging vessel after it caught fire in the ship channel. Photos and videos shared on social media show flames and a large plume of black smoke in the area.

A Coast Guard Sector/Air Station Corpus Christi MH-65 Dolphin helicopter crew was launched to the scene, hoisted two injured crewmembers, and airlifted them to a local hospital, the agency said. Four others were taken to a different nearby hospital by ambulance, and two additional people have refused treatment. Details about the extent of the injuries were not revealed.

Port Corpus Christi authorities said the fire involved a natural gas pipeline, and that operators have isolated the line and are working with emergency responders and stakeholders to contain the incident and ensure area safety.

A Coast Guard MH-65 Dolphin helicopter crew, two Station Port Aransas 45-foot Response Boat-Medium boat crews, a boat crew from the Cutter Chinook, and a boat crew from the Cutter Manta are on scene, with the Port of Corpus Christi Police and Fire departments and Signet Maritime tugs, Signet Constellation and Signet Starts & Stripes, to conduct the search and respond to the fire.

State and local emergency crews are on scene responding to the fire, and authorities are encouraging people to avoid the area, though port officials said there is no threat to public safety.

"The State of Texas is working closely with local partners in Corpus Christi as well as the Coast Guard to assist with emergency response efforts following the explosion," Texas Governor Greg Abbott said in a statement. "Texas Division of Emergency Management and Texas Department of Public Safety personnel are already on the ground to provide support, and the Texas Commission on Environmental Quality is monitoring air quality in the area."

Abbott said the state could provide additional personnel and resources if required.

As home to a number of oil refineries and shipping terminals, Corpus Christi is the third largest port in the U.S. and Texas' top port for crude oil exports.