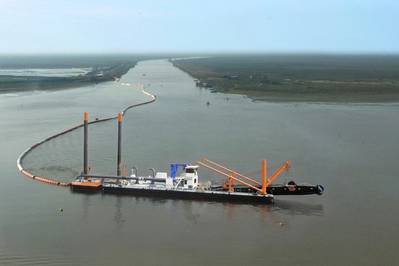 A naming ceremony was held at Damen Dredging Equipment in Nijkerk on November 16 for the second of Van Oord’s Damen Cutter Suction Dredgers (CSD) 650, the Mangystau, due to be delivered in the first week of January. The ceremony was attended by members of the Van Oord and Damen families.
Damen received the first order for a CSD650 from dredging and marine contractor Van Oord at the end of 2014; the Ural River. With delivery scheduled six weeks from ordering, the on-stock availability of the vessel was a critical factor to support Van Oord’s dredging projects in the Caspian Sea. With project time extended, Van Oord required additional equipment to finalize operations.
In contrast to the time restrictions for the Ural River, this second order allowed for Van Oord to apply a procurement approach to the sourcing of the dredger. The quality and flexibility to incorporate all of Van Oord’s wishes, in addition to the strength of Damen’s first delivery, ultimately facilitated securing the tender for the Mangystau.
Jointly engineered modifications to the Ural River allowed change of her classification to Coastal Operation, additional tank capacities and specific safety and environmental features to comply with Van Oord’s requirements. Initial feedback regarding the first vessel is encouraging, indicating a substantial increase in production exceeding expectations, in combination with a significant reduction in fuel consumption and a reduced crew requirement.
“The success of sister ship Ural River laid the basis for the design of the Mangystau. Damen’s knowledge combined with our practical experiences resulted in a very versatile vessel. The name Mangystau refers to a province in the region of the Caspian Sea, which is an important working area for Van Oord,” explained Govert van Oord, area director for Europe.
“Damen is keen on standardization and consistently providing the same standard and quality. This approach is compatible with Van Oord’s approach to continue to use the same type of dredger for their project. This has numerous benefits not only in the understanding of how the dredger will operate, but it also means that the spare parts package can be used for both dredgers,” stated Damen Sales Manager Jeroen van Woerkum.