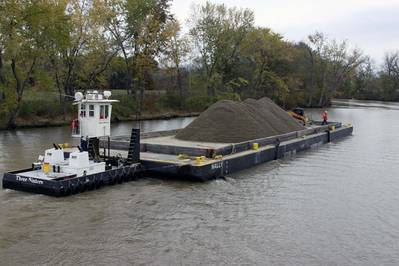 After an area has been dredged of contaminated sediment to the EPA's standards, clean backfill is transported on a barge by a tug boat. The backfill replaces dredged sediment and maintains the natural contours of the riverbed. (Photo: EPA)

U.S. Environmental Protection Agency Regional Administrator Judith A. Enck announced the start of the sixth, and final, season of dredging of PCB-contaminated sediments from the bottom of the Hudson River. The historic dredging project – one of the largest and most complex cleanups in Superfund history – began in 2009. The EPA is overseeing the dredging project that is being conducted by General Electric Company (GE) under the terms of a 2006 legal agreement. According to GE, the company has invested more than $1 billion on the cleanup project to date.
The EPA-mandated cleanup called for the removal of an estimated 2.65 million cubic yards of PCB-contaminated sediment from a 40-mile stretch of the upper Hudson River between Fort Edward and Troy, New York. To date, approximately 2.5 million cubic yards of PCB-contaminated sediment have been removed. The dredging work is expected to be wrapped up this year, with habitat restoration to continue into 2016.
“The Hudson River has been damaged by a toxic legacy that this federal Superfund cleanup is addressing,” said Regional Administrator Judith A. Enck. “The massive amount of PCBs that have finally been removed from this treasured river is a tremendous accomplishment that will benefit the communities along the Hudson River for generations to come.”
Several logistically challenging areas remain to be dredged this year, including those near dams and shallow waters around islands. Dredging will also continue in a two-mile section of river near Fort Miller, located between the Thompson Island Dam and Fort Miller Dam, which is inaccessible by boat. Approximately 250,000 cubic yards of PCB-contaminated sediment is targeted for removal in 2015.
The Superfund cleanup has created up to 500 jobs annually. More than 280 area contractors, subcontractors, vendors and suppliers have provided a variety of services or materials to support the work.
Between 1947 and 1977, an estimated 1.3 million pounds of PCBs were discharged into the river from two GE capacitor manufacturing plants located in Fort Edward and Hudson Falls. PCBs are potentially cancer-causing in people and build up in the fat of fish and wildlife, increasing in concentration as they move up the food chain. The primary risk to humans is the accumulation of PCBs in the body from eating contaminated fish or wildlife, where PCBs build up. PCBs are neurotoxins, which means they affect people’s brains and nervous systems, they also impact the reproductive and endocrine systems and are likely to cause cancer.
Dredging is conducted when the Champlain Canal is open for the season, typically between May and November. Dredging occurs 24 hours a day, six days a week. Three to five mechanical dredges remove contaminated sediment from the river bottom. The dredges are mounted on deck barges and use environmental clamshell buckets to place the dredged sediment into separate barges.
In the land-locked section of river, where direct water-transport of loaded barges to the processing facility isn’t possible due to the presence of dams at its north and south end, loaded barges will be pushed by tugboat to a loading station on a narrow section of land on the east shoreline of the river, south of the Thompson Island Dam. Once there, the material in the barge will be off-loaded into a bin on land and then re-loaded into another barge in the Champlain Canal channel. From there the barges will be pushed by tugboat upriver to GE’s sediment dewatering and processing facility located on the Champlain Canal in Fort Edward, New York.
Once the barges filled with dredged sediment arrive at the processing facility, the most contaminated sediment is first processed. Debris is removed and sediment is mechanically dewatered; the water is treated on-site and then returned to the Champlain Canal. The dewatered sediment and debris are loaded into railcars for transport to approved out-of-state disposal facilities.
During dredging operations, an extensive water quality monitoring program is in place to measure PCB levels at several downstream locations and to track the movement of dredged material downriver. Air quality is also measured around the dredge areas and near the processing facility while work is underway. Additional monitoring is required by the EPA to reduce the impacts of dredging and dewatering operations on surrounding communities.
After dredging is completed and the last of the dredged material at GE’s sediment processing facility has been transported off-site, the facility will be decommissioned in accordance with a decommissioning plan that is subject to approval by EPA.
In October 2014 the EPA announced that GE has agreed to conduct a comprehensive study of contamination in the shoreline areas of the upper Hudson River that are subject to flooding, called floodplains. Under the agreement GE will investigate the PCB contamination in a 40-mile stretch of the Hudson River floodplain from Hudson Falls to Troy, New York and will develop cleanup options. This investigation is expected to cost about $20 million. The project area covers 6,000 acres of floodplain. Over 7,000 soil samples have already been collected.