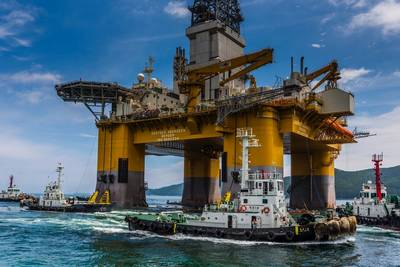 Profit & loss Q2 2014
Operating revenue for Q2 2014 was USD 272 million (USD 289 million), a decrease of USD 17 million, or 6 %. Operating revenue decreased due to reduced engineering- and well services activity in Norway and in UK, as well as loss of revenue contribution from the divested Mooring business line in the Well Services segment.

The reduction in operating revenue is also explained by reduced income for Deepsea Atlantic due to the completion of the 5-year special periodic survey (SPS) in Q2 14, which was partly offset by increased financial utilization on the remaining MODU fleet this quarter compared to Q2 2013.

“The financial results for the second quarter of 2014 are reflecting reduced demand for engineering and well services primarily in the North Sea market. At the same time we see a positive trend in operational regularity of our mobile offshore drilling units internationally, resulting in increased financial utilisation of these units”, says CEO Simen Lieungh.

Odfjell Drilling reports the following material events in the second quarter of 2014: