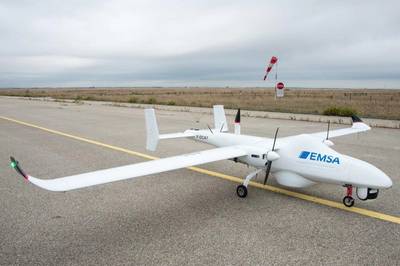 Aiming to test the use of Remotely Piloted Aircraft Systems (RPAS) in enhancing the maritime awareness picture in the French Mediterranean Sea, Secrétariat Général de la Mer requested the European Maritime Safety Agency (EMSA) set up a multipurpose maritime surveillance operation, having the Navy (Marine Nationale) and customs (Douanes) as the operation's strategic and tactical leaders.

Marine Nationale and Douanes will command and monitor the missions remotely from Toulon and Marseille respectively and the RPAS will be operated from the French Air Force Base (BA125) of Istres.

The contractor operating the RPAS is the consortium REACT (with partners CLS and TEKEVER) and the aircraft to be used is the AR-5 unmanned fixed wing aircraft. This asset has a payload comprising a maritime radar, electro-optical and infra-red cameras, AIS receiver and EPIRB antenna. It is ready to fly under SATCOM and can perform night and day operations.