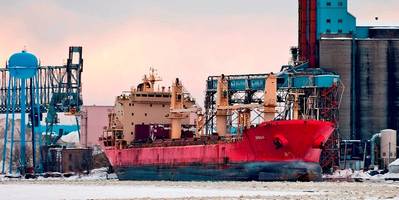 The last oceangoing vessel to call on the Port of Duluth-Superior for the 2013 shipping season is expected to depart later today (ETD 4:00 PM). The Orsula arrived Sunday to load a total of nearly 22,000 metric tons (24,250 short tons) of durum wheat at the CHS and Gavilon grain terminals in Superior. Bound for Italy, the Orsula will be the last “saltie” to make a full transit this season of the 2,340-mile Great Lakes-St. Lawrence Seaway system.

The 200-meter (656-ft) Orsula, flagged in the Marshall Islands, is operated by Fednav Limited, the largest dry-bulk shipping company in Canada. Based in Montreal, Fednav also had the honor of hosting the 2013 season’s first ship ceremony here in the Twin Ports aboard its Federal Hunter. [March 30 being the earliest arrival on record]. In both cases, Daniel’s Shipping Services served as local vessel agent.

Laker traffic will continue on the Great Lakes for a few more weeks as the Soo Locks (Sault Ste. Marie, Mich.) aren’t scheduled to close to vessel traffic until January 15.