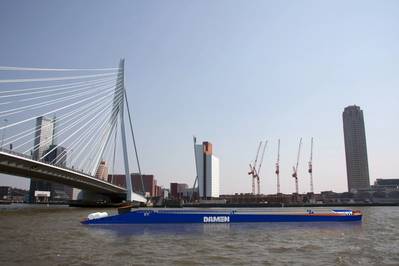 Rob Schuurmans, Director of Bodewes Binnenvaart and drs. ir. Jan Sneekes, QaGroup CEO stress: “We deliver our customer’s products from A to Z in accordance to their standards and their specific product requirements in the most environmentally friendly and safe manner possible. Because this concept is built up on a modular basis, shippers, and barge operators can pick and choose. For example, we can provide the vessel including crew for one client, but just a financing arrangement for another, while handling all for a third client. We can tailor the concept to the customer’s exact requirements. This concept provides an integrated shipbuilding, ship management and financing solution.”

LNG
A vessel running purely on Liquefied Natural Gas (LNG) lies at the heart of the pioneering concept. The permission to use LNG as fuel on this vessel has been granted by the Central Commission for the Navigation of the Rhine and the United Nations Economic Commission for Europe (ADN-UNECE), meaning that the vessel can travel on all the international inland waterways. The LNG concept operates alongside another innovation developed by Bodewes Binnenvaart, the air lubricated hull ‘ACES’. Working in combination, these innovations lead to astonishing fuel savings and emissions cuts.

Getting cargo off roads
The two Dutch companies originally met each other about four years ago. Bodewes Binnenvaart was at that time starting to develop a low emissions concept for inland waterway shipping and the QaGroup was exploring using LNG as an alternative fuel. As well as that Bodewes Binnenvaart was working on ACES, where the first stunning results at full-scale had just been recorded at Maritime Research Institute Netherlands (MARIN). They discovered that both their systems had the same aim of saving fuel, costs and reducing emissions.

They both had a clear view: combine these two solutions into one pioneering design and then an even stronger concept is created. “We expect this new concept to appeal to shippers of consumables particularly, oil companies and logistic operators keen to get their cargo off the roads and keen on having one partner, one contact to deal with.”

Sophisticated power management
Although the LNG/ACES system can be fitted to any inland ship, at the moment the system has been designed around a 110 m long vessel, the EcoLiner, which is based on the well-known Damen River Liner 1145. The new vessel has a bunker capacity of approximately 45 cu m LNG and it will be fully classified by Bureau Veritas.

Mr Schuurmans adds: “A typical ship engine runs most efficient at a load of 80% of its full power. With four generator sets the power management system will ensure the engines do so. Energy created can be stored when using less power or instead it can be used to heat or cool the cargo or for cooling water or heating accommodation. In addition, waste heat is used and becomes energy, so absolutely nothing is wasted. On top of this, there’s the 15% fuel reduction because of the ACES hull.” Extensive trials have proven that fuel savings of around 25% can be realised on the EcoLiner.

Guaranteed uptime
The concept provides reliability and guaranteed maximum uptime. The separate generators means that there is built in redundancy and the LNG vessel also comes with a Damen full service contract, which guarantees maximum uptime and service 365 days a year. Damen engineers can carry out maintenance while the vessel is continuing to do its job.

The partners are already exploring markets in Germany, Belgium and the Netherlands but also they are going further afield in Brazil, China and India and say they have received a very positive response worldwide from leading shippers and barge companies.

A future industry standard
“This gives shippers the chance to operate along “green corridors” and to reduce their total cost of ownership because ultimately they can make huge savings on transport costs.

“We want to change the market. This is an innovative, safe, environmentally friendly and extremely cost competitive concept. There is no reason why it cannot be the inland shipping industry standard for the future,” the partners stress.